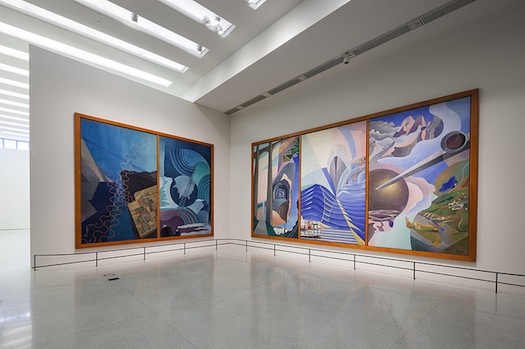 The Guggenheim steps inside the world of Italian Futurism with its current exhibition. What started in literature quickly transformed into a style of visual and performing arts, trickled down into politics, and then quickly became a way of life.

The Untitled Magazine was invited to see the exhibit in an exclusive showing sponsored by Lavazza, with curator Vivien Greene. The exhibit showcased the avant-garde aspects of this early twentieth-century style, which focused on the movement of time, space, the human body, the mind, society and politics. Italian Futurism is presented chronologically, snaking through the uniquely-shaped round structure of the Guggenheim. Futurists favored modernity, and believed twentieth-century Italy was to be industrial, innovative, and always moving forward- much like the artwork. In that direction, many pieces featured different forms of machinery. Trains were a repetitive motif, as they were a new and fascinating concept during that time period. Once Fascism began to overrule the 1930’s, the darker side came forth. Futurists were believers in war, and this became a central theme in the art. War imagery became abundant, whether it was the use of the Italian flag, guns or armor. This style was prevalent until the mid 1940’s. The exhibit featured everything from paintings, sketches, books, furniture, ceramics, and even fashion. Films were also scattered throughout the exhibit to give visitors a more in-depth vision of the era. If you haven’t seen it yet, be sure to check it out before the exhibition wraps on September 1st.

– Victoria Monaco for The Untitled Magazine

THE 1975'S EXCLUSIVE INTERVIEW WITH THE UNTITLED MAGAZINE