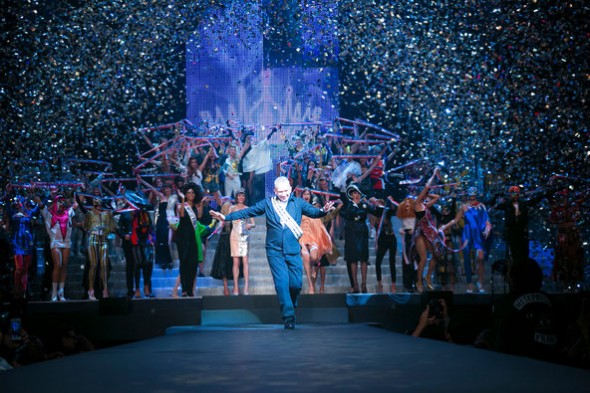 On Saturday, September 27th, 2014, the iconic designer Jean-Paul Gaultier made his final ready-to-wear collection, which was shown as part of Paris Fashion Week Spring/Summer 2015. In standard Gaultier manner, the glitzy and glamorous show took place in Paris’ Le Grand Rex cinema, also known as the largest movie theater in all of Europe. Celebrities, fans, editors and designers all crammed into the theater’s lobby and waited impatiently with champagne and popcorn for the French designer’s grande finale. Amongst the enthusiastic crowds of people carrying their “Miss Jean-Paul Gaultier” sashes (what was sent out in place of invitations) were some notable faces including Boy George, Alexander Wang, Jeremy Scott, and Pierre Cardin–the designer who Gaultier assisted when he was just starting out in fashion in 1970.

Known for his decadent shows and innovative aesthetic, Fashion’s longest “enfant terrible” decided to have his final ready-to-wear show play with various kitschy pageant antics, such as “elections” and sashes. Dividing the themes of his collection into various “Misses”–Miss Mariniere, Miss Tour de France, Miss Meteo–Gaultier also sent down older misses that resembled all of the women in fashion who’ve supported him in his 38-year long career–a not so subtle nod to Vogue Italia’s editor-in-chief Franca Sozzani, actress/model Carmen Dell’Orefice, and the creative director of American Vogue, Grace Coddington. Coca Rocha was crowned “Miss Jean-Paul Gaultier” and when she “fainted” from over-excitement, her performance was adorable and funny, and after she got back up, confetti exploded from up above, and in came Gaultier with a big smile glued to his face. The show, of course, ended with one big dance party on the stage.

Although this was Gaultier’s final show, it certainly doesn’t mean he will no longer be designing. Shifting his attention to haute couture, he’s told Women’s Wear Daily that “I have found true fulfillment in working on the haute couture, and it allows me to express my creativity and my taste for research and experimentation”

“Commercial constraints,” he added. “As well as the frenetic pace of collections, don’t leave any freedom, nor the necessary time to find fresh ideas and to innovate… I will be able again to express my creativity without constraints.”

For all the looks from Gaultier’s collection, click here. Meanwhile, here’s a video highlighting some of the Gaultier’s pageant-themed show: