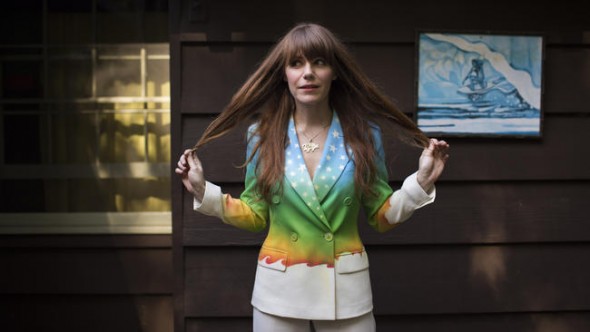 The adorable indie-rock singer Jenny Lewis has just released a music video for her new single “Just One of the Guys,” which stars some of Lewis’ actress friends: Anne Hathaway, Brie Larson, Kristen Stewart, and Tennessee Thomas as her band.  The video features Lewis decked out in an awesome lavender-to-white ombré pant suit– with stars like the above picture included–while the rest of her lady friends rock out in the background in all-white suits.  “Just One of the Guys” is the first single from Lewis’ album The Voyager, which was released by Warner Bros. Records on July 29th.  As the frontwoman of Rilo Kiley and Jenny & Johnny — her collaboration with long-time boyfriend Jonathan Rice — as well as singing with The Postal Service, Lewis is nothing short of an indie-rock queen; it shouldn’t come as a surprise that the music video for “Just One of the Guys” marks her directorial debut.

The music video for “Just One of the Guys” is filled with fun colors and a quirky light-heartedness that reflect the song quite well; half-through the video, the ladies switch out of their suits and into matching Adidas track suits with stick-on moustaches, as they shift ridiculously into these “macho” poses– you know, just like one of the guys.  See the video for “Just One of the Guys” below.

Be sure to watch the video all the way through, because you don’t want to miss the hilarity that is Anne Hathway attempting to break-dance without her ‘stache falling off: