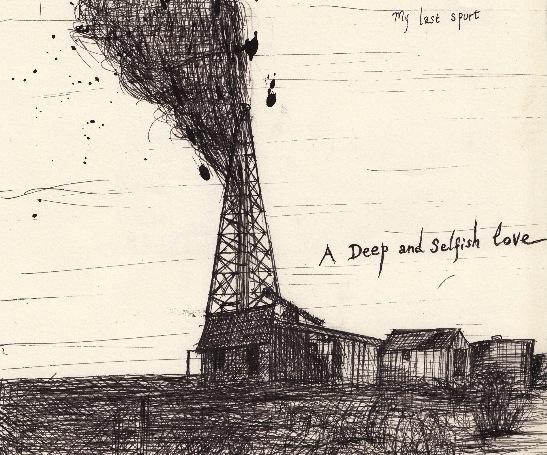 After graduating with a degree in Fine Art from London’s worst art school in the mid-80s, John Tottenham moved to the United States and stopped painting. He has resided in this country ever since. After many years of resistance, he finally sold out to the lucrative, fast-paced world of poetry. He is the author of ‘The Inertia Variations,’ an epic cycle on the subject of work-avoidance, indolence, failure and related topics, and ‘Antiepithalamia & Other Poems of Regret and Resentment,’ a sequence of mean-spirited love poems with particular respect paid to the institution of marriage. His acerbically entertaining essays about the art world and life in Los Angeles appear regularly in Artillery magazine. He is also an online aphorist, celebrated for his gnomic and anomic utterances on the worldwide web, and a renowned performer of stand-up poetry.

Tottenham also paints and draws. An old-fashioned pencil and paper/ paint and brushes man – an educated outsider and academic primitive – he has produced hundreds of pen and ink drawings of desolate vernacular scenes, overlaid with darkly humorous text. These will be on display, alongside a piece that revisits his adolescent obsession with the female members of a notorious California cult. These fifty tiny, delicately-wrought portraits (mostly renderings of mugshots), arranged in one frame, are an attempt to recapture the qualities that he found so haunting – and which were responsible for his formative impressions of Los Angeles – as a morbidly romantic youth trapped in the heart of the English countryside.