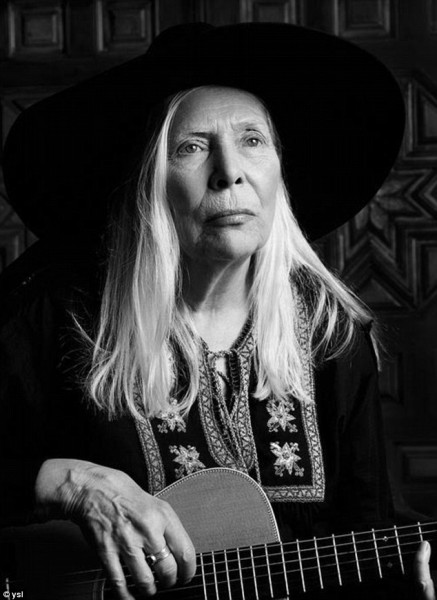 Joni Mitchell appears in Saint Laurent‘s new campaign, shot by Hedi Slimane. The music and style icon is now 71, but as stylish as ever. Her long grey hair not only makes her look wise, but it is also on trend at the moment. That’s right, grey hair has been in fashion for a few years now, with hipsters even dying their hair grey as a trendy alternative to dying the greys away as you get older. Joni appears in three black and white portraits for Saint Laurent, wearing a tunic from the label’s Folk collection, a classic YSL fedora and a leather cape Hedi custom made for her. The campaign is part of Saint Laurent’s Music Project, which in the past has included Marianne Faithfull, Marilyn Manson, Kim Gordon, and Daft Punk.

Hailed as one of the best songwriters, Joni’s folk styled songs and honest voice is timeless. Her upcoming compendium of songs from the past 40 years of her career is called Love Has Many Faces: A Quartet, a Ballet, Waiting to Be Danced. She doesn’t want to be called a “folk singer” or a “singer-songwriter,” which would be saying she is like “the female Bob Dylan,” because her music doesn’t deserve to be genre-ized like that.

The photos were shot at Joni’s home in Bel Air, California. She has been wearing YSL for a while, and the vintage YSL hat is hers. Hedi is known for his beautiful photography as well as being Saint Laurent’s designer. A complete series of portraits of Joni Mitchell shot by Slimane will be released later this month.

Much is being made about Joni’s age being 71, and most articles about her campaign also mention Joan Didion, 80 years old, who has just received a Celine campaign. Their faces stand out, and in a good way. There’s a lot carried within these photos. Age before beauty, but in this case, age is beauty.

10 FILMS YOU MUST SEE BEFORE THE OSCARS