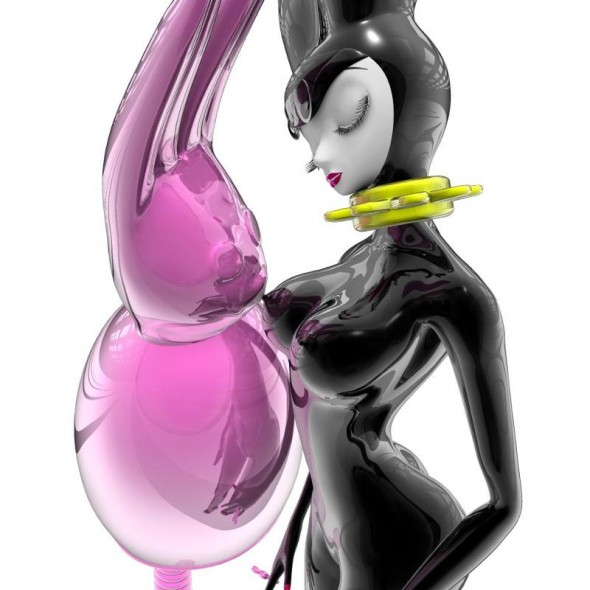 Each work in the exhibition engages with various social and cultural codes, which inevitably reflect cross-cultural references such as Asian manga/anime, dynamics in cyber culture, music videos, Eastern and Western notion of ideal beauty, and the recent boom in plastic surgery in Korea and in other Asian countries.

All three artists have created their own fictional characters to present their narratives.

In case of Mari Kim, “Eyedolls,” digitally rendered Korean/western hybrid maidens with huge eyes, are playing roles of the artist’s surrogates and alter egos. Hye Rim Lee’s digitally animated character “TOKI” is an example of the hyper perfected female body promoted by advertising and the media. TOKI directly refers the social phenomenon in South Korea, a country with the highest rate of plastic surgery in the world.[1] On the other hand, Jihee Kim’s young girls with the seemingly bright but unnatural smile and odd eyes represent the contradictory situation where people display a happy façade, while privately dealing with loneliness, peer acceptance and consumerist desires.

Each character’s distinctive sensibility comes from the artists’ post feminist dissection of the current cultural moment, in which they engage in as participants, observers, critics and active anthropologists. Not rejecting, nor conforming, the artists themselves engage in the transformation and re-imagining of Korean culture.

0
The Untitled Magazine September 13, 2013
No Comments Yet