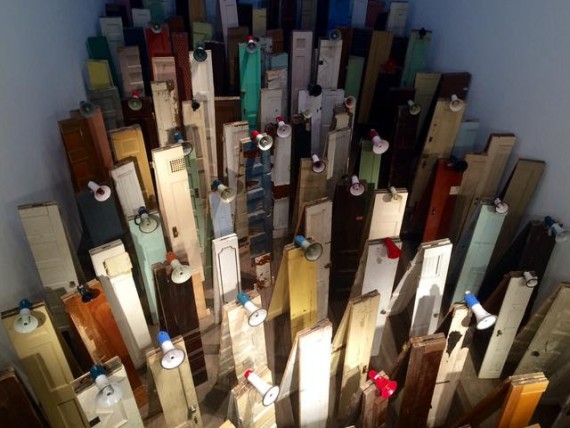 Show your injuries will be Kader Attia’s debut exhibition with Lehmann Maupin, presented in two installations, one at each gallery location. Attia grew up in both Algeria and the suburbs of Paris, and he uses this experience of living as a part of two distinct and diverse cultures as a starting point to develop a dynamic practice that reflects on the aesthetics and ethics of different societies. He takes a poetic and symbolic approach to exploring the wide-ranging repercussions of Western cultural hegemony and colonialism on non-Western cultures, investigating identity politics of historical and colonial eras, and in our modern, globalized world. Attia assumes the roles of historian, anthropologist, philosopher, and ethnographer through his art-making process, and his nuanced international perspective informs the works on display in this exhibition.

At the West 26th Street gallery, Attia will construct an intricate installation of works dispersed throughout a labyrinth-like space. Focusing on Attia’s theories on the cycle of injury and repair, and how such actions are inextricably linked, the installation will feature works that address the legacy of European colonialism, the role that the imposition of Christianity played in the development of non-Western societies, and “the relationship between the political and the intimate,” as Attia notes. Visitors will follow a dedicated path through this immersive construction, engaged by the multi-faceted themes of Attia’s artistic practice. Highlights of the installation include the diptych slide projection Dispossession (2013), which explores Attia’s research on the Vatican’s collection of ethnological artifacts; Artificial Nature (2014), a floor sculpture constructed of many antique prosthetic legs; and work composed of two large-scale reproductions of historical paintings depicting Catholic masses, Émile Jean-Horace Vernet’s The First Mass in Kabylia (1854) and Victor Meirelles’ The First Mass in Brazil (1860).

At Chrystie Street, Attia will create a new work titled Asesinos ! Asesinos ! (2014), a large-scale installation of over 100 doors split and re-joined as A-frame sculptures. Standing upright and confronting viewers as they enter the gallery, the doors recall a crowd of demonstrators activating a common space, a point that is affirmed through the megaphones affixed to the tops of some of the doors. The installation’s group of anthropomorphic forms alludes to the type of gatherings that have taken place in various public spaces across the world in recent times, demonstrations of clashing values about political views and social space and other politicized issues. The door can also be seen as a metaphor for barriers, confinement, and opportunities for freedom that may be experienced in various realms of modern society. The artist lives and works in Berlin, Germany.