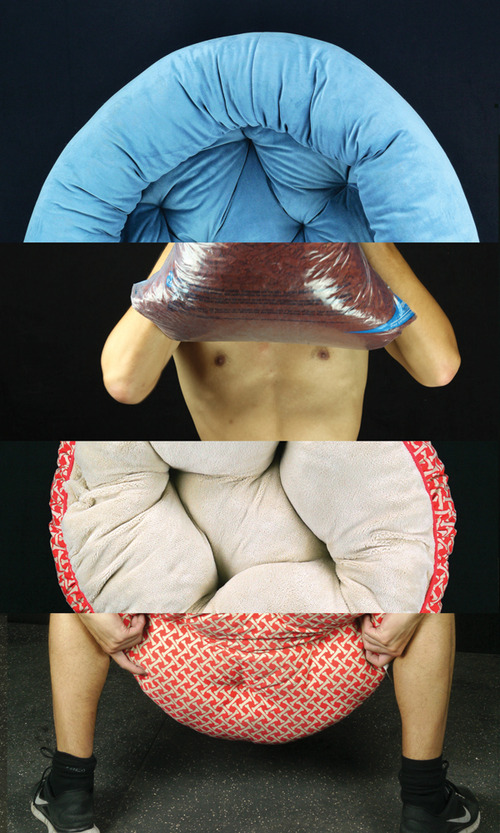 Night Gallery is presenting Polite, Intelligent and Respectful a solo exhibition by LA artist Kenneth Tam. It appears that the image of a dog eating its own excrement is still an object of fascination and disbelief. Scat, or shit-play, is not unknown to humans but we can somewhat safely relegate that to the domain of the sexual fetish.  For one’s dog to openly engage in scatological behavior is where the instinctual and libidinal qualities of a dog come into tension with how we train and expect them to function. Dogs are bottomless wells of affection and tenderness, but are also prone to eat shit and then kiss you on the face.

For his exhibition, Tam uses a variety of pet-related accessories, from beds and balls to altered toys and dog food, to create an environment of cleanly welded sculptures.  These freestanding objects waver between smartly hygienic and debased, like gym equipment repurposed for sexual pleasure or animal slaughter.  Encouraging the viewer to adopt a more pet-like point of view, these sculptures point to the perverse and complicated nature of relationships in which subservience plays a major role.  These works are complemented by a video piece in which Tam and an anonymous collaborator act out a scenario in which the artist becomes an unwitting male model.  This video is a continuation of Tam’s ongoing series of videos made from the artist’s encounters with people met over the Internet.  The work, in fact, began with Tam’s collaborator ‘liking’ one of his prior videos posted online, and ends with the artist engaging in a mock life-drawing session.  Although in the video Tam plays the role of subservient muse, power dynamics are complicated by Tam’s desire to transform his collaborator’s initial act of passive voyeurism into the artist’s larger project.