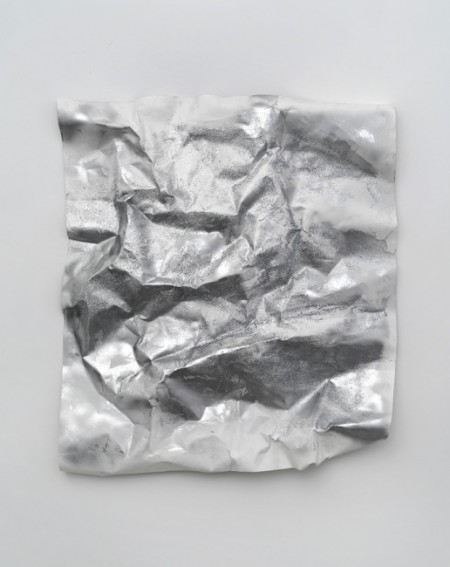 Kim Gordon’s new artwork – yes, she’s an artist in more ways than one – will be on exhibit at 303 Gallery, her first solo exhibition at the space, following a 2014 exhibit she did there with Karen Kilimnik.

For her new work, Gordon moves from application of paints, resins, glitters and fiberglass, using a variety of methods to work on canvas, to physical manipulation of the canvas and a playful irreverence in its presentation. Paintings are crumpled, overturned and flung; battle scars from past performances become gestural abstraction. A black and white banner photo of Kim in the studio – mid-painting, mid-performance – hangs over the exhibition, dramatizing the big reveal.

Kim Gordon’s art has been shown internationally including exhibitions at MoMA/PS1, New York; White Columns, New York; and Künstlerhaus, Graz. On June 12, Gordon will stage a performance at the opening of her solo exhibition at the DESTE/Benaki Museum in Athens. Girl in a Band, a book of Gordon’s memoirs, was released in February by Dey Street Books. Is It My Body, a collection of her writings on art and performance, was published in January 2014 by Sternberg Press. A widely recorded musician, Kim Gordon is a founding member of Sonic Youth and performs as Body/Head with Bill Nace.

A benefit honoring Kim Gordon and Dan Graham will be held at Cipriani Wall Street, New York City on Thursday, May 21, 2015, from 6 pm – 12:30 am, with dinner and performances by The Feelies, Stephen Malkmus, and The Raincoats, and after-party DJ sets by Jake Meginskyand Bill Nace/Open Mouth Records Crew and hosted by Sarah Blakey-Cartwright, Lizzi Bougatsos, Nick Mauss, Ken Okiishi, Ellie Rines, and Emily Sundblad.

Also look for Gordon’s artwork in an upcoming exhibition titled “Noise Name Paintings and Sculptures of Rock Bands That Are Broken Up,” at Benaki Museum, Athens, from June 12 – August 30, 2015. The “Noise Paintings” popularize the type of music that they symbolize and acknowledge, and thus, a web of references emerges between authorship, visualization and the reciprocal influence of poetic communication. The paintings are in a way oracular, as the words they display are orphaned from their intended context, existing in a pure visual language space, with no informational potential beyond their imagistic and contextual properties.