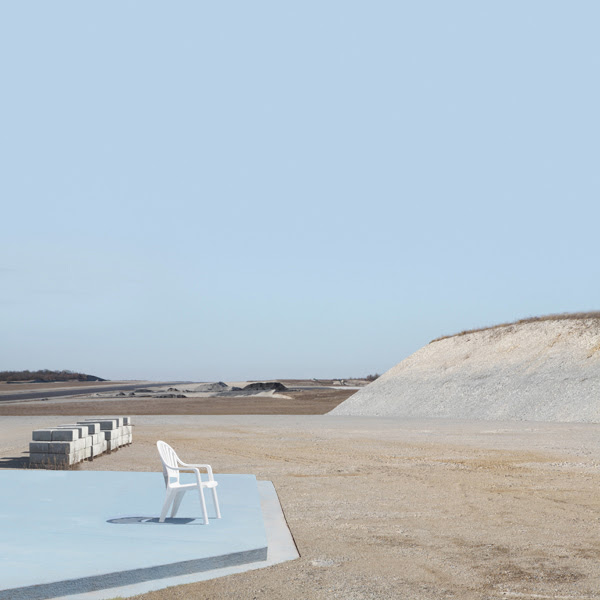 Galerie Richard presents Transition, an exhibition of photographs by Lauren Marsolier, marking the artist’s first solo exhibition with the gallery and in New York from January 9 through February 8, 2014. Lauren Marsolier offers photography that is deliberately deceptive in a way that prompts the acknowledgment of this rare radicality. Nothing from digital manipulations displaying all kinds of technical possibilities to impress us. Sun-drenched landscapes without any living beings, movement, nor sound. The strength and impact of her photomontages reveal themselves over time, as we stroll about from one piece to another and then back to the first pictures seen. Her images are condensed time and they require this same stretched out time from the viewer.

The sky predominates with a slightly grayish blue, which unifies the whole series as the dominant color. The image of the white plastic chair on a blue ground is the same shade as the sky, thus grabbing our attention. What is this chair doing on this large deck? What is there to see from this chair that deserves our pausing to look further? Indeed the chair and the pedestal are formally justified as a color zone associated with the sky in a nice abstract three shade composition blue, brown and beige. In the triptych we wonder the need of a street lamp placed at the corner of a stranded construction in the desert.  Why is there a car covered by a tarp in front of a parking meter?  As a matter of fact can we really talk about a desert as we notice a huge manicured lawn on the side? Is it even conceivable to encounter no sign of life, not even a bird on these large and open stretches of land? Questions abound without answers and contradictions amass. Besides we admire the harmony of proportions between the constructed and the space of landscape, the right proportions between the internal spaces into buildings which offer some shade and the infinite bright spaces of the land. We become gradually aware of each element in each image is part of a perfect geometrical composition. This perfection contributes to this sensation of malaise, uneasiness, facing a sort of unreality.

The title of the series, Transition, gives a clue as to the mindset that inspired these images. Going from large metropolis to deserted areas, one can experience a solitary transitional period, during which we feel like a stranger in our new surroundings as much as the surroundings feel strange to us. This temporary feeling of disconnection can surface with any type of change in our lives, be it personal or collective. The passage from an alienated real to an accepted one relates to the peculiar condition of 21st century man spending as much time facing digital screens as facing real surroundings. 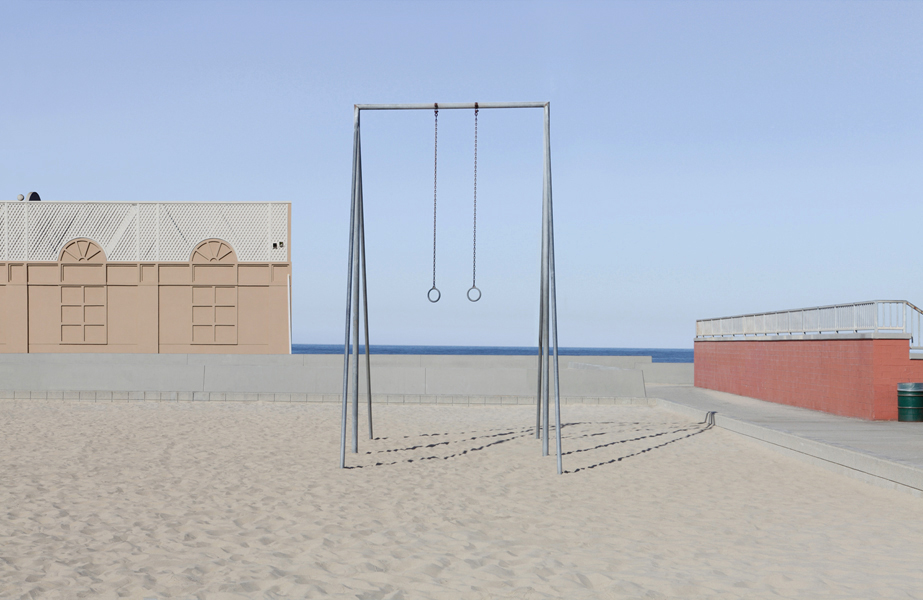 The image with the structure of rings of gymnastics with the two buildings feels close to the atmosphere experienced in paintings by Giorgio de Chirico. The picture of the open indoor room with a large green seat might recall Edward Hopper. There are good reasons to associate Lauren Marsolier’s photography with paintings, as they are composed as such with as much conscious freedom. These are digital compositions, deftly and patiently elaborated, a bit like ‘a puzzle’, as the artist puts it, culling the pieces from thousands of images taken in various separate places except she does not know in advance the definitive result. These photographs stimulate the unconscious and the subjectivity of the viewer. They feature a world becoming more than ever a construction of the mind, with its increasing virtuality, hyperreality and overall artifice.

The series Transition introduces Lauren Marsolier as a young photographer to watch from an international perspective on the history of contemporary photography, because it is a striking series in its deceptive radicality, as well as its visual, psychological and conceptual strength.