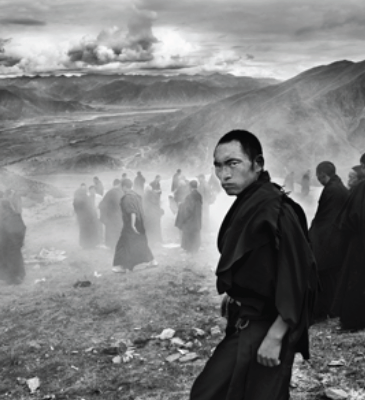 A Journey in Tibet

After the riots of 14-16 March, 2008, the photographer Laurent Zylberman and the journalist Eric Meyer were among the first westerners authorized to enter in Tibet, a forbidden region, under traumatized military guard and armed to the teeth.“ We had the desire to place ourselves in the interstices of the economic, social and religious Tibetan society, seize people’s eyes and their relationship with each other revealing a reality they cannot talk or voluntarily express” said Laurent Zylberman.

A Journey in Tibet is a series based on a 15-day mission through “The Top of the World”, between Lhasa, Shigatze, Giangtze and Namso Lake. This photographic journal describes the culture’s vulnerability, allowing us to discover significant internal contradictions of China’s policy for its “autonomous territory.” Each photo solicits strange, unexpected and profound poetry.

This awe-inspiring environment in extreme conditions, settled by a very sparse population conveys a feeling of gravity and greatness. The religious feeling and behavior of friars, laymen and laywomen are discussed, as well as Tibet’s spiritual and popular rural culture, which remains largely intact today.

This confrontation nourishes introspection. It forces us to confront the necessary efforts to help both sides of this heterogeneous population, overcome their biases, and to convert the liability of hatred into an asset of mutual respect.