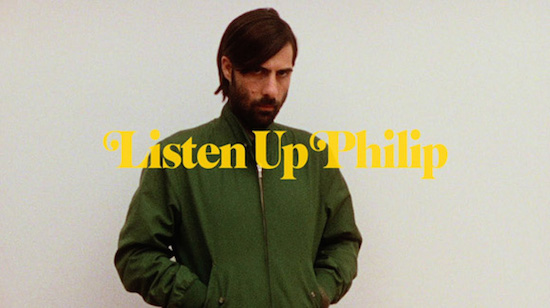 Listen Up Philip, Alex Ross Perry’s third feature-length film will either repulse audiences or seduce them. Wearing an abrasive indie-hipster aesthetic, the film is a hilarious and bleak portrayal of the modern day lit-snob/writer living in New York City. The story follows Philip (a fantastic Jason Schwartzman), a brooding novelist in his 30s and on the brink of his second novel’s release. Unfortunately, his editor has already told him that the book will receive a negative review on The New York Times. Not to worry though, his editor reminds him – he’ll still be listed on the “35 under 35” list! The emphasis of the fact is facetious and Philip’s indifference to being on the list reveals a bigger criticism of disparaging fads found in magazines like Forbes, which publishes an annual list devoted to lauding young Americans for their big achievements. Deeply perturbed, the young writer refuses to do any press for his upcoming book. Instead, he abandons his successful photographer girlfriend, Ashley (an exquisite Elisabeth Moss), to join his literary idol Ike Zimmerman (Jonathan Pryce) at his isolated home upstate. A weathered literary veteran and a misanthrope himself, Zimmerman advises Philip, New York “has great creative energy but it has no productivity energy.” For every writer (or creative artist for that matter) who’s grappled with the emotional roller coaster of needing to create something brilliant amidst the noise and chaos of the city – even at the risk of obliterating all meaningful relationships – you’ll find there’s nothing not palatable about this film; even the story’s self-absorbed leading man is charming. 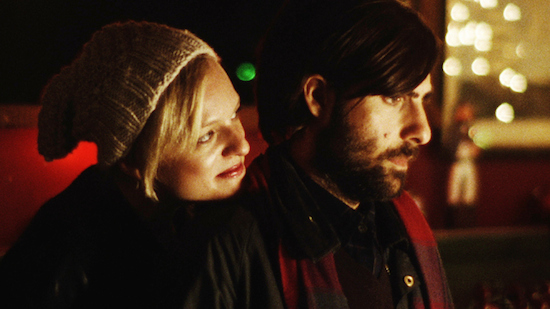 To quote one of Philip’s ex-girlfriends, he’s “an insufferable piece of shit.” When we meet him for the first time, he’s berating the ex-girlfriend for never supporting him in his creative endeavors. Next we see him criticizing an old friend for not going after his dreams just as he did. Then he turns down a fan-girl who tries to seduce him, not because he has a girlfriend, but because she doesn’t remember previously meeting him when he was a novice writer. Philip is perpetually insatiable and he blames it on everyone around him–doesn’t this sound like every writer we know? An age-old writer’s curse, he lives in a world of fiction. He’s the protagonist of the narrative he self-imposes on his life, and therefore, can’t seem to escape his solipsistic worldview. Unable to have meaningful relationships because of his glaring narcissism, Philip surprisingly doesn’t repulse us as much as he should. If anything, his acerbic comments and zero regards to the people around him is what makes him such a charming character. Schwartzman, who’s no stranger to playing eccentric characters with unlikable quirks (notably, Wes Anderson’s Rushmore) has an air about him that’s inherently winsome, so it’s easy to watch Philip spiral downwards with every bad decision he makes.

It’s not hard to point out where the references to Philip Roth are in this film. Just look at the candy-sweet typeface on the movie’s poster, which is taken straight from the cover of Roth’s infamous 1969 novel, Portnoy’s Complaint. Borrowing qualities from Roth’s self-conscious characters and rhetoric, Perry’s film also has a self-consciousness of its medium. And this is felt most powerfully through the cinematography and the voice-over narration (Eric Bogosian) which functions like how a third-person narrator in a novel would. Giving us anecdotes and small details of these characters’ backgrounds, the narration creates a wonderful dynamic in the film’s narrative, because it further amplifies the bookish quality of Listen Up Philip. 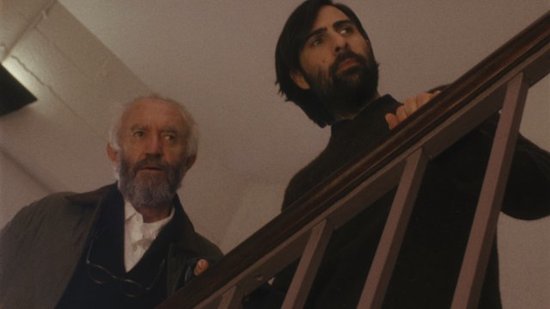 The literariness of Listen Up Philip even shows in how the narrative is visually told. A remarkable nuance of this story is that for 45 minutes we don’t see Philip. We hear about him but we don’t see him. Philip’s name is in the film’s title, and we begin and end with him, but a good chunk of the film is devoted to the complexities of two other characters Philip knows: Ashley and Ike Zimmerman. Following both those characters very closely and how they go about their days without Philip in sight, Perry opens the narrative and lets us get to know them on a very intimate level. We watch as Ashley cycles through the motions of heartbreak and loneliness; we watch as Ike struggles with finding purpose in his life again. Through this close third person POV, we learn about their flaws, histories, and idiosyncrasies, and we care about them a little bit more.

For what it’s worth, Listen Up Philip is at its very core, a very indie film.  Shot on 16mm film by Sean Prince Williams, the shaky and fuzzy Instagram-filtered frames add an intimate quality to the film, as if the cinematography itself was an extension of the characters’ emotions. In private conversations, the camera quietly peers over characters’ shoulders and hones in on their expressions with a tenderness that’s so ferocious, it traps us in the anxiety, loneliness, and frustration that inundate them. Smart, funny, dark, and exceptionally literary, Listen Up Phillip possesses many nuances that set it far apart from your average indie flick, and for that, I am incredibly grateful to Alex Ross Perry.

Also starring in the film are Krysten Ritter, Joséphine de La Baume, and Jess Weixler. Listen Up Philip had its premiere at the 2014 Sundance Film Festival. Be sure to check it out when it comes to New York on October 17th, 2014 (national expansion to follow).

– Article by Mary-Linh for The Untitled Magazine

See the trailer below: