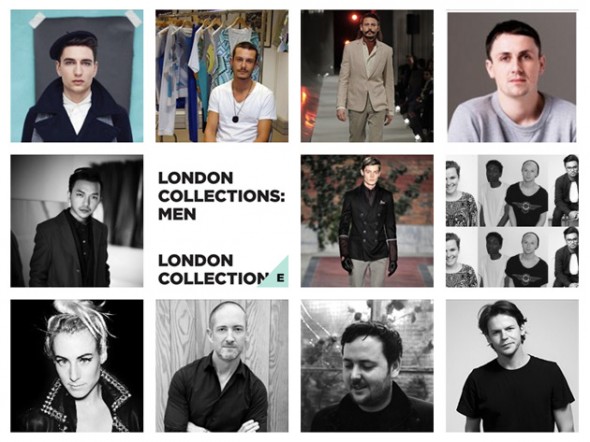 Beginning January 6th, the biannual celebration of men’s style descends upon London for London Collections: Men, also known as men’s fashion week, featuring collections for Autumn/Winter 2014. Two years ago, Editor of GQ (UK) Dylan Jones launched the fashion affair, which has since grown into an event that packs 130 designers into three days, attracting editors, buyers and tastemakers from around the world. Considering London is the wellspring of the three piece suit, the trench coat, brogues, bowler hats, tartan and tweed, it has long dictated what goes fills the closets of men, and the British Fashion Council estimates that the men’s clothing business brings £10 billion to the British economy annually, a staggering percentage of the £15 billion some-odd net worth of menswear sales worldwide.

Alexander McQueen, Burberry Prorsum, Christopher Kane, TOM FORD and Savile Row tailors represent the established designers and houses that will put their designs down runways. But part of the success of the British men’s fashion industry is undoubtedly because of the support BFC gives to rising stars. Every LCM, ten designers the NEWGEN MEN initiative, sponsored by TOPMAN, awards financial sponsorship and mentorship support to emerging designers (J.W. Anderson and Sibling, both of whom will show this week, have been prior recipients). This season, winners of the two incubator awards include Agi & Sam, Astrid Andersen, Common, Lee Roach, Nasir Mazhar and Shaun Samson among others.

Shows and presentations will take place at iconic historic London locations, such as Victoria House and The Old Sorting Office. And scattered throughout are business seminars, parties hosted by the likes of Esquire and Ben Sherman, films and shopping events galore. The onslaught is already underway, so suffice to say, gentlemen: We implore you to keep your eyes on the runways from now until Wednesday.