Academy Award nominees Carey Mulligan and Helena Bonham Carter, and three-time Academy Award winner Meryl Streep, lead the cast of a powerful drama about the women who were willing to lose everything in their fight for equality in early 20th century Britain. The stirring story centers on Maud (played by Carey Mulligan), a working wife and mother whose life is forever changed when she is secretly recruited to join the U.K’s growing Suffragette movement.

Galvanized by the outlaw fugitive Emmeline Pankhurst (Meryl Streep), Maud becomes an activist for the cause alongside women from all walks of life. When increasingly aggressive police action forces Maud and her dedicated fellow Suffragettes underground, they engage in a dangerous game of cat-and-mouse with the authorities, who are shocked as the women’s civil disobedience escalates and sparks debate across the nation.

Inspired by true events, Suffragette is a moving and emotive drama exploring the passion and heartbreak of those who risked all they had for women’s right to vote—their jobs, their homes, their children and even their lives.

“The film is told through the eyes of a women we can relate to,” says Meryl Streep. The film is period yet contemporary and uncannily relevant. “I stand by what I say in the film: deeds not words. Every single one of us can do something to make a change, especially as actresses in the film industry. We can suggest to producers that half the cast in our films must be women.” 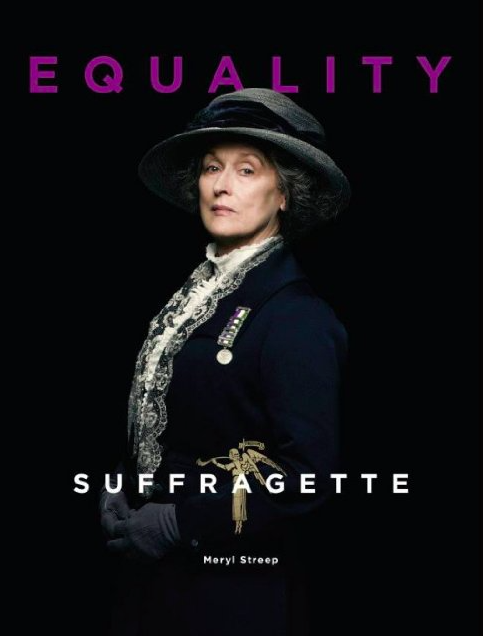 Mulligan commented regarding the profundity of the film, “I’ve never been in anything that has meant as much as Suffragette. What I loved about this story, character and script was that it would’ve been such an easy choice for Maud to have a little girl and to be making these decisions to change the future for her daughter. However, she makes these choices for her son, so that he can live in an equal world. This was a human rights issue, not just a women’s rights issue.”

Watch the Trailer Below: