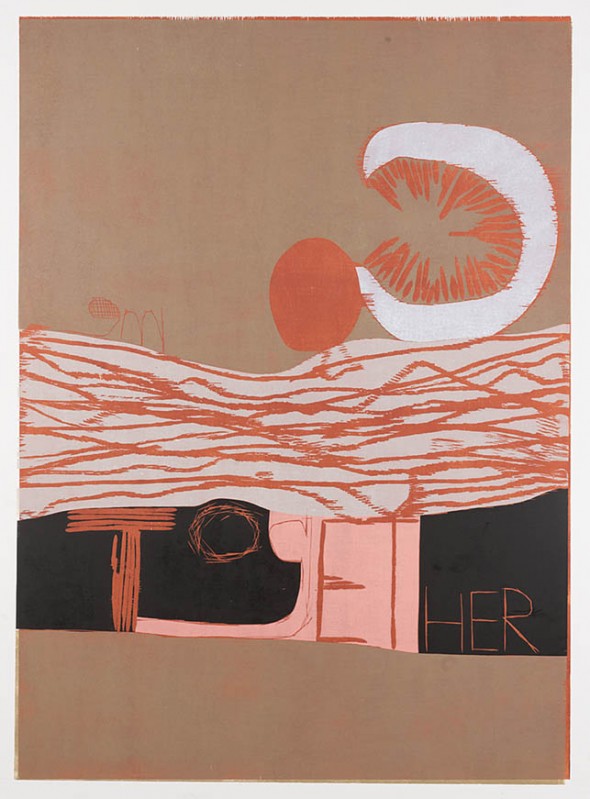 Paul Stolper Gallery is proud to present ‘Norwegian Wood’ – an exhibition of ten new woodcut prints in large format by Norwegian artist Magne F. Since 2004, the artist has primarily explored self-written texts, letters and lyrics across various mediums in his work. This new series ‘Norwegian Wood’ uses music as its main reference point, but this time it is the iconic pop music of the Beatles, music which Furuholmen grew up listening to, and which directly inspired him to leave his native country to become an internationally renowned musician at a young age. Borrowing titles of songs and lyrics, the artist creates new works by transforming and changing these well-known word combinations into a new visual language. ‘I use letters and words as the architecture of my works – both for composition and conceptually, as a kind of emotional architecture.’ (Magne F, March 2013).

These vibrant, new works mark a return to music as the main source of inspiration, and also to the monumental woodcuts that launched the artist’s career in 1995. This is significant because it was in Furuholmen’s early woodcuts from 1995 and 1996 that a defining feature of the artist’s work – text – first appeared. ‘KUTT’, meaning ‘cut’ or ‘cuts’ in Norwegian, was Furuholmen’s first museum solo show, at the Henie Onstad Art Center in Oslo in 1995. The exhibition title pointed towards the physical action of cutting into the wood, but perhaps more significantly, to wounds and scars left by memories. These prints had titles of individual jazz standards, or ‘cuts’, from a set list found in a trumpet case once belonging to Furuholmen’s father. The series served as a visual journey back into a musical direction and style different to the one Furuholmen himself had pursued in his own musical career. As a continuation of the theme, the Paris exile recordings of jazz legend Chet Baker inspired a 1996 portfolio, titled ‘Everything Happens to me’. For these works Furuholmen used Baker’s recordings as a sound-backdrop during the entire artistic and printmaking process, in an attempt to further the experimentation of transforming the music into some sort of corresponding visual language.

By returning to the medium of woodcuts, the artist places himself within a large cannon of artists, including Edvard Munch, Ernst Kircher and Emil Nolde who produced labour intensive and powerful woodcuts. The process of cutting, carving and scratching the surface of the wood is direct and physical. It is this immediacy and spontaneity of mark making, which is then reflected in the finished work that drew the artist back to woodcuts. There is almost a performative element to printmaking of this sort and as such, it links the music, poetry and art of Magne F together. Influence of the Fluxus movement of the 1960’s, noted for blending different artistic media and disciplines can also be seen. In this respect, it is through the juxtaposition of word and image, text and sign, moving from sound to image to installation, and back, that the artist creates a unique and interdisciplinary body of work.

In addition to the title of the exhibition ‘Norwegian Wood’, named after the famous Beatles song, and through Furuholmen’s personal relationship with pop artist Peter Blake, another link to British culture is revealed. Blake, whose work famously incorporates letters and text, and which inspired Furuholmen’s ‘Alpha Beta’ series of 2009, has loaned Furuholmen his personal set of antique woodcut tools to create this suite. By using these borrowed tools to produce the works, Furuholmen adds a humorous, conceptual nod to Blake’s own history and obsession with pop culture.

Paul Stolper Gallery is also pleased to launch Magne F’s new monograph ‘In Transit’ providing an in-depth survey of the artist’s career and artistic process to date. Published by Press Publishing in Oslo and with texts by Sune Nordgren, Ute Meta Bauer, Richard Dyer, Mark Gisbourne and Selene Wendt, ‘In Transit’ is the first cohesive presentation of Furuholmen’s activities as a visual artist.

Magne Furuholmen’s work has been exhibited both in the UK and abroad. Since 2008 his artistic activities have expanded to include exhibitions and performances with ‘Apparatjik’, a collective of collaborating artists. Performances include ‘Thinking Inside the Box’ for the opening of the new The Astrup Fearnley Museum in Oslo in 2012, ‘The Apparatjik Light Space Modulator’ at The Neue Nationalgalerie, Berlin in 2011, ‘Globe Art Café’, at Deutsche Bank, Frankfurt 2011 and the ‘We Are Here’ performance at The Serpentine Gallery, London 2010. The artist lives and works in Oslo.