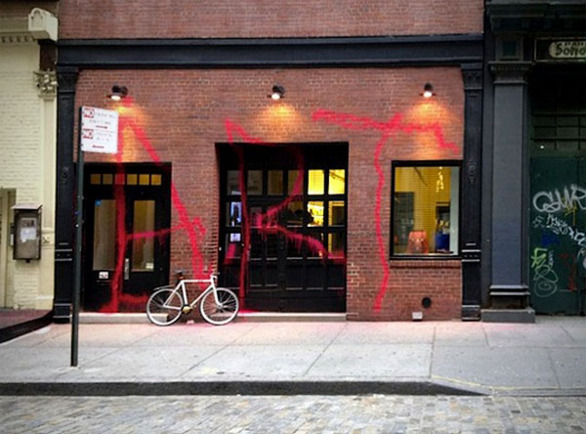 The fashion blogs can’t stop talking about the latest feud between Marc Jacobs and French graffiti artist Kidult.  It all started on the night of the Met Ball when Kidult took a fire extinguisher full of hot pink paint and spray painted the word ART across the brick face of the Marc Jacobs store in SoHo.  This graffiti comes after similar attacks by Kidult on numerous other stores including  the Christian Louboutin, Celine, Hermès, Louis Vuitton, YSL, and Colette stores in Paris.  Kidult bragged to his twitter followers the next day posting pictures of his vandalism with the caption “Kidult x marc jacobs.”  The Jacobs PR team immediately spun the story, tweeting an instagram photo of the storefront with the words “Art by Art Jacobs.”  Things escalated when Jacobs took the next step putting the tweeted image and caption on a light pink t-shirt.  According to the official Marc Jacobs twitter, and confirmed by New York Magazine‘s The Cut,  the shirt is now on sale for $689, or, if you’d like it signed by the artist, for a mere $680.  Kidult was enraged, creating his own almost identical t-shirt in response, the only difference being the caption, which says “Not Art by Kidult,” and the price, which is around $8.  Despite Kidult’s attempt to draw the focus back on him, it’s clear who won this battle.  Graffiti, as an artform. is meant to be about using blank, unappreciated areas of the urban landscape as a canvas to create, not destroying storefronts to attract media attention.  By capitalizing on Kidult’s “art” in an over the top way Marc Jacobs turned the tables, beating Kidult at his own game. 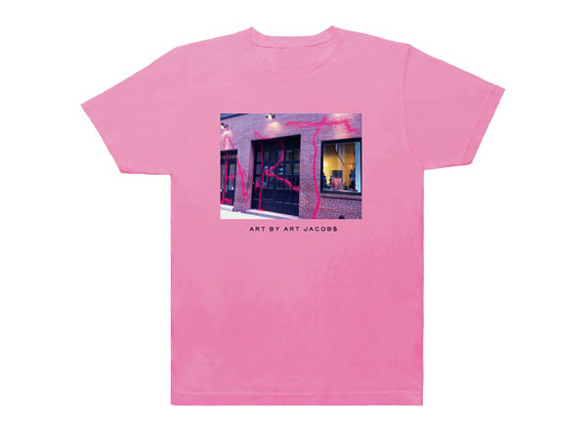