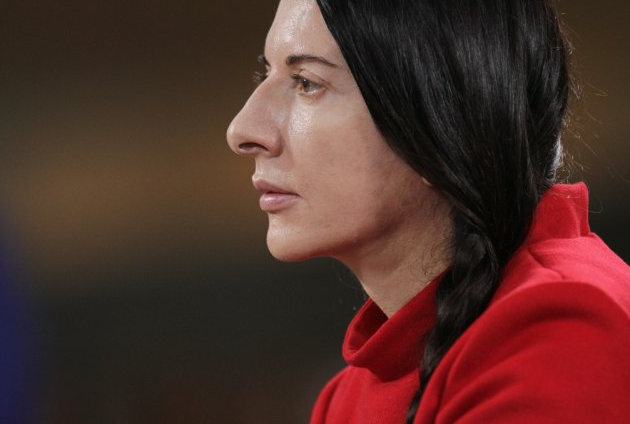 Marina Abramović: The Artist is Present directed by Matthew Akers is a documentary that examines the artistic career of Marina Abramović, one of the most famous performance artists in the world whose career has spanned nearly four decades. The film centers around a retrospective exhibition of Abramović’s work in 2010 at The Museum of Modern Art in New York, while looking back at a career that not only pushed the boundaries of what performance are is, but changed the way performance artists are commodified and sold in the art world. Abramović’s pieces utilize her body as a vehicle for her art, showing total disregard for her own health and safety.  Affectionatly called “the grandmother of performance art,” the then sixty-three-year-old Abramović allowed first time director Matthew Akers unprecedented total access to her life.  The result is an intimate portrait that goes beyond the art, showing what a warm, funny, and deeply emotional woman Abramović can be outside of her work, which can be brutal and unforgiving.  In fact, her pieces are often characterized by their nudity and forms of bodily deprivation and punishment, which makes her a locus of controversy, outrage, and fascination, in other words, all of the elements that go into creating an art world superstar. For Abramović, her retrospective at the MoMA marks the pinacle of her career and an opprotunity to once and for all put performance art on the map as a legitimate art form. The exhbit, The Artist is Present, was mostly dedicated to the earlier parts of Abramović’s career, featuring images, videos and installations, many of which involved her one time performance partner and lover, Ulay. The exhibit included seven of Abramović’s most famous works performed by a troupe of forty-one young performers hand-selected and trained by the artist herself, as well as a completely original piece created specifically for the museum. One of her most famous works included in the exhibit, Imponderabilia, featured two artists standing face-to-face totally naked on opposite sides of a doorway that the public can only get through be squeezing uncomfortably between them.

The piece Abramović created for the retrospective, as its title suggests, features her in the act of simply being entirely present.  In a room on the second floor of the MoMA a large square was marked off with two simple chairs and a table in the center.  Abramović would sit in the chair from the museum’s open until its close every day for the length of her exhibit, from March to May, without moving. When the museum would open in the morning visitors would run up the steps to be the first in line to sit across from the world famous artist. One by one, visitors were led to a chair across the table from Abramović and told that alhtough they could not touch her, speak to her, or make any sudden movements, they could sit across from her for as long as they like.  As each new person approached, Abramović would look at the ground until, after a moment’s pause, she would look up, making unwavering eye contact with her new guest, creating what she called a “direct energy dialogue.” Even mediated through film, the result is indescriably powerful and intense.  Abramović brings such a presence, strength, and connectivity of emotion that she becomes an entity beyond human, achieving, as she described it, the effect of “artist as mountain.” Lingering on her face and the faces of her visitors, most of whom break down in tears or smile euphorically, the documentary effectively captures the emotional challenge that lies at the core of all of Abramović’s work; an exploration of human connectivity, the strength of the mind and a study of transcendence, while remaining a feat of sheer physical endurance. HBO’s documentary Marina Abramovic: The Artist is Present is a stunning and captivating film that brings Abramović’s unbelievable power and vision to a whole new world of viewers who might otherwise never have the chance to experience it first hand. Simply, it is a must-see film that, much like Abramović’s work, goes beyond the artist to make a larger commentary on what it is to be fundamentally human.