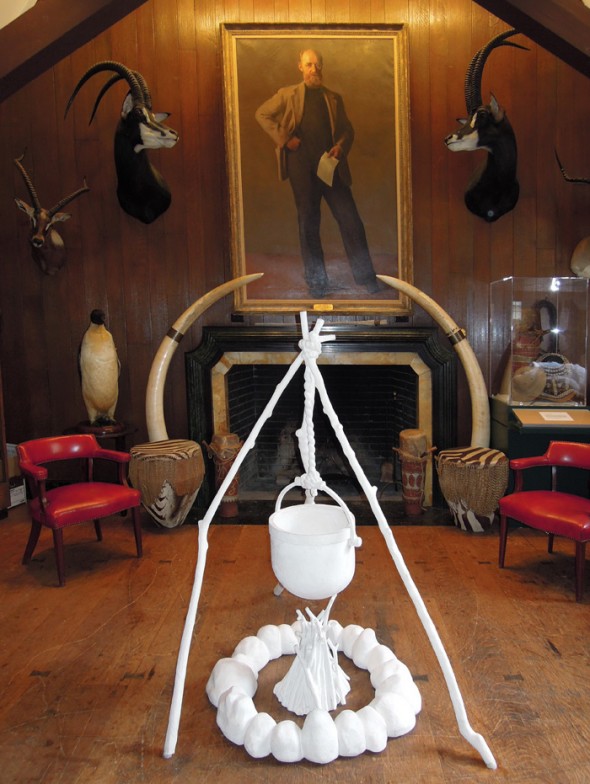 Mark Dion was born in New Bedford, Massachusetts in 1961. He received a BFA (1986) and an honorary doctorate (2003) from the University of Hartford School of Art, Connecticut. Dion’s work examines the ways in which dominant ideologies and public institutions shape our understanding of history, knowledge, and the natural world. The job of the artist, he says, is to go against the grain of dominant culture, to challenge perception and convention. Appropriating archaeological and other scientific methods of collecting, ordering, and exhibiting objects, Dion creates works that question the distinctions between objective (rational) scientific methods and subjective (irrational) influences. The artists spectacular and often fantastical curiosity cabinets, modeled on Wunderkabinetts of the 16th Century, exalt atypical orderings of objects and specimens. By locating the roots of environmental politics and public policy in the construction of knowledge about nature, Mark Dion questions the authoritative role of the scientific voice in contemporary society.
He has received numerous awards, including the ninth annual Larry Aldrich Foundation Award (2001) and the Smithsonian American Art Museum’s Lucelia Art Award (2008). He has had major exhibitions at the Miami Art Museum (2006); Museum of Modern Art, New York (2004); Aldrich Museum of Contemporary Art, Ridgefield, Connecticut (2003); and Tate Gallery, London (1999). Neukom Vivarium (2006), a permanent outdoor installation and learning lab for the Olympic Sculpture Park, was commissioned by the Seattle Art Museum. Dion has recently completed a major commission, OCEANOMANIA: Souvenirs of Mysterious Seas for the Oceanographic Museum in Monaco. He is the co-director of Mildred’s Land, an innovative visual art education and residency program in Beach Lake, Pennsylvania.

For over two decades Dion has worked in the public realm on a wide range of scales, from architecture projects to print project in newspaper. Some of his most recent large scale pubic project include “The Amateur Ornithologist Clubhouse” a Captain Nemo-like interior constructed in a vast gas tank in Essen, Germany; ‘The Hanging Garden’ a collaboration with the landscape design firm Gross Max in central London, which consists of a fire escape-like vertical garden; and ‘Den’ a large scale folly in Norway’s mountainous landscape which feature a massive sculpture of a sleeping bear resting on a hill of material culture from the neolithic to the present.

Dion is currently working with the architectural firm of James Corner/ Field Operations and Creative Time on the visual art programming to redesign the Seattle Waterfront. This includes the development of a long-term visual art strategy for the site as well as establishing large-scale permanent ecological interventions.