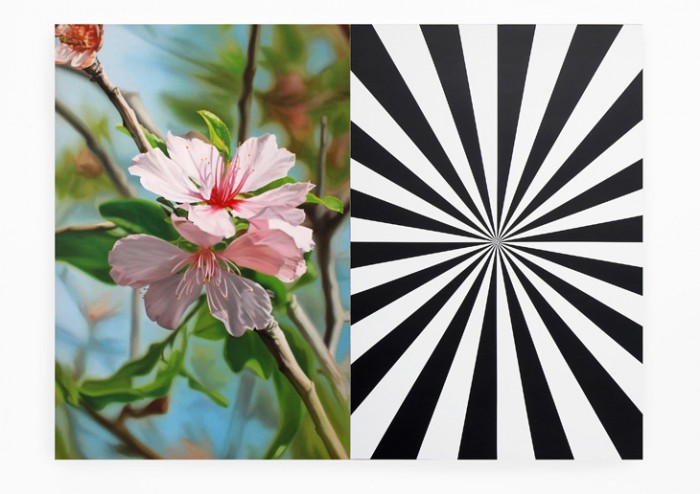 The Golden Age, an exhibition of new paintings by Mustafa Hulusi

Hulusi here presents a darker, more somber version of his signature diptychs, which bring together largescale, hyperreal paintings of fruit, flowers and optical abstraction. Painted with controlled gestures and
refined technique, the diptychs take as inspiration Ashik Kerib (1988), the masterpiece by Armenian
filmmaker Sergei Parajanov. Displayed against dark-coloured walls, the suite of paintings induces a sense
of another age, inviting the viewer to pause and contemplate a displaced time.

In Golden Age, the artist develops his inquiry into images of symbolic power and historical memory,
with particular reference to his country of origin, the Mediterranean island of Cyprus. The flower offers
a symbol for the earthly, mortal and figurative. Tulipa Cypria is an endemic tulip found in remote and
unpopulated areas of Cyprus. Due to human activity, the flower is now an endangered species. Within
the island’s everyday language, the flower is called Cyprus Black Tulip; shortly before it perishes, its
petals turn a very dark, almost black tone. This morbid yet mesmerising appearance consistently arrests
the human gaze.

The gold leaf in the abstract component of the diptychs is at once auratic and an index of materiality. A
mineral resource that functions as a measure of wealth, gold has strong mythic connotations. The
starburst motif performs an analogous function, as both a visual convention and a potentially endless
sign: a universal signifier for infinity. Together the gold leaf and starburst motif speak of the infinite
drive of reproductive excess overcoming all limits.

In their juxtaposition the two elements of the paintings, the figurative and the abstract, present an
imposed division between different ideologies and systems of thought, representation and value.
Presented together within the frame, though the two systems theoretically conflict with each other, they
share qualities of fragility and an alluring sense of shape and aesthetic form.

The Byzantine and Renaissance colouration of the paintings, consisting principally of deep blues, greens
and reds, as well as gold, evokes past epochs of religiosity. While such epochs might be thought to have
been superseded by a more materialist culture, Hulusi’s paintings re-awaken a potential for spirituality
and beauty in a secular form as experienced in art and nature.

Contemplating Duality, an exhibition of new works by Barnaby Hosking in the \\BACK GALLERY\\

In the exhibition, the artist explores notions of duality through the apparent schism that occurs when
mirror sculptures encounter light, and the poetic metaphors that result from this interplay. In Not Two,
gold butterflies populate the wall of the gallery, their wings made up of light and shadow, suggesting a
fluttering. Real movement is present in Endless, a hanging thread of diamond shaped gold mirrors,
which rotates slowly on its axis. When the specular side of the diamonds intersects with the light, it casts
reflections that glide across the walls of the gallery, creating a sense of continuity.

Hosking’s recent work finds its roots in Eastern philosophy’s investigation into the workings of the
mind. In the exhibition, the sculptures express the artist’s understanding of processes of thought
formation and attribution of meaning. According to Hosking, when a thought is manifested, it enters
into the phenomenal world and thus travels from the space of ‘emptiness’ to the world of relative form.
At this point, our conditioning as humans creates duality, as we label the thought as good, or bad. But
at its origin, all thought is neither positive, negative, or neutral: It just is.

In the two works presented, the thought’s state of existence is represented by the sculptures’ physical
material, gold mirror, which holds within itself the potential for both dark and light. In Not Two, the
gold mirror butterflies that fill the gallery space convey a sense of effortless freedom. They have
accepted the light and the dark, without which they cannot fly.

Such acceptance of opposites is a continuing theme in Endless. Its form is influenced by the history of
modern abstract sculpture in its reference to Constantin Brancusi’s Endless Column, but instead of
serving as monument, it becomes a reflection on impermanence. Using a circular motion to represent
time, the column becomes a means of meditation on the continuity between the apparent duality of
birth and death. A reflection is born, to live its journey and to be absorbed back into the shadow. It will
be born again, further along the chain, with no beginning, no middle and no end.

Contemplating Duality expresses an idea of wholeness. Numerous units make up each work, which in
turn relate to each other to become a unified, breathing entity. The projected light from the column will
at times catch a butterfly, reminding us that duality is relative, and fleeting.