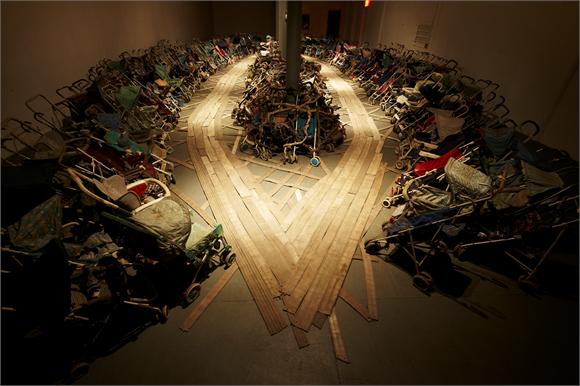 PART OF NYC 1993: EXPERIMENTAL JET SET, TRASH AND NO STAR.

First exhibited in 1993 in an abandoned fire station on 141st Street, “Amazing Grace” is composed of more than three hundred abandoned baby strollers collected by Ward off the streets of Harlem. Arranged alongside strips of fire hose in the shape of a ship’s hull, the installation is accompanied by an audio recording of Mahalia Jackson’s performance of ‘Amazing Grace’, playing on a loop. Ward was inspired by his subject matter after observing a stray stroller amid rush hour traffic at the 125th Street Metro North station. The emptiness of the lone stroller so affected Ward that he sought to heighten the sadness he associated with it by grouping hundreds of found strollers together to form a social commentary on the evolution of this hard-hit neighborhood.

In a recent profile on Ward in the Wall Street Journal, New Museum curator Gary Carrion-Murayari is quoted as saying, “This neighborhood has changed and Harlem has obviously changed radically, and Nari was watching it happen. The work does make sense in neighborhoods where there is social transformation happening, for better and for worse.”

Since the first exhibition in 1993, “Amazing Grace” has been presented six additional times throughout the world, including Athens, Paris, and Turin. “Amazing Grace” currently resides in the private art collection of Dakis Joannou. Ward’s relationship with the New Museum began twenty years ago when, in 1993, the Museum presented the artist’s first major solo museum exhibition in its former space in SoHo.

In conjunction with the New Museum’s exhibition, Lehmann Maupin has mounted an intimate presentation of Ward’s work in the upstairs gallery at 201 Chrystie Street and installed one of the artist’s large-scale sculptures in the main corridor at 540 West 26th Street. Lehmann Maupin has represented the artist since 2009. Ward is currently participating in a fellowship in Rome, Italy, as part of the 2012-2013 Rome Prize, a yearly award bestowed by the American Academy in Rome on a select group of individuals who represent the highest standard of excellence in the arts and humanities. Forthcoming solo exhibitions are scheduled for the Museo d’Arte Contemporanea, Rome, in 2013, and at the Louisiana State University Museum of Art, Baton Rouge, in 2014.

For further information on Nari Ward, please visit our website at lehmannmaupin.com. Additional information relating to NYC 1993: Experimental Jet Set, Trash and No Star is available on the New Museum’s website, newmuseum.org.