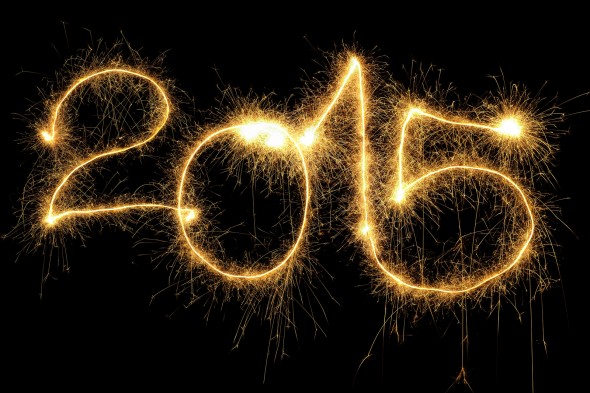 New Year’s Eve is one of the biggest holidays of the year, especially for those who like to party. It brings closure to all the events of the previous year and welcomes the new year with great hope and anticipation. Both the past and future are taken into consideration, so in many ways, New Year’s Eve can be a very emotionally charged holiday. The turning point of midnight carries a lot of spark, from the fireworks to that New Year’s kiss with a person, who might be your loved one, a stranger, or a future loved one. It’s a holiday that brings us all together as we raise a glass to the passing of time. Below, The Untitled Magazine compiled a list of the best things to do during New Year’s Eve in four of the biggest party cities in the US: New York, Las Vegas, Miami, and Los Angeles. See the complete list below, and check back for updates!

Have a New Year’s Eve event you think should be on this list?  Email us at: events@untitled-magazine.com

New York is the home of New Year’s Eve. With the iconic ball-drop in Times Square televised to millions of people worldwide, it’s where every eye turns to on Dec. 31st. But besides joining the crowds of midtown, there are plenty of other things to do in New York for NYE, whether you’re interested in finishing off 2014 with a great concert, a great party, or a great meditation session. 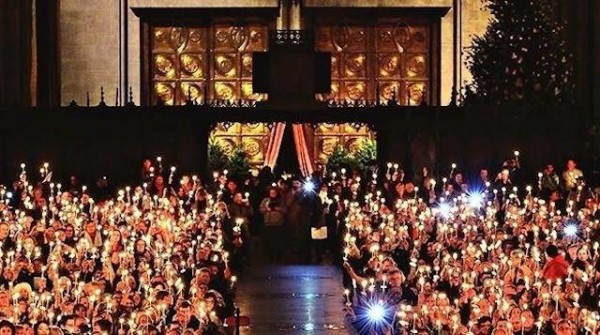 Price: A limited number of general admission seats are free and open to the public. Ticketed seating and sponsorship packages are also available, starting at $30.

The Annual Concert for Peace at St. John’s Cathedral promises a more centering and meaningful way of celebrating the New Year (as opposed to getting plastered off your face.) Although it doesn’t last through midnight, it is a good way of starting out the night before other activities (like getting plastered off your face.) Founded by Leonard Bernstein in 1984, the annual New Year’s Eve Concert for Peace has been gathering old friends and new for more than a quarter of a century. The music, the candles, and the spirit of peace send audiences out into the chilly January night with renewed hope for the world we share. This year’s concert, hosted by Harry Smith, features guests Judy Collins and Jason Robert Brown. 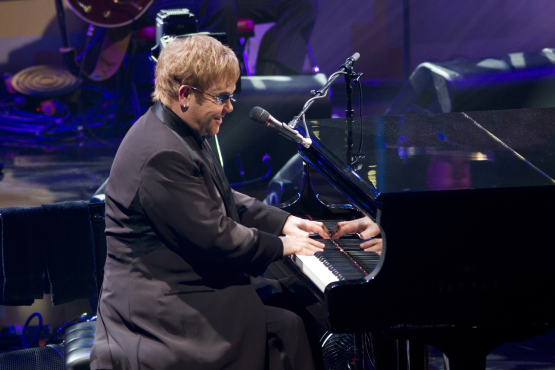 Price: $86 and up. Not many tickets left. Purchase here at Ticketmaster.

Elton John will perform on New Year’s Eve for the first time in New York City when he headlines a concert at Barclays Center on December 31. The opening act for Elton John will be Bright Light Bright Light. Elton’s performance will include renowned hits and classic album tracks from throughout Elton’s incredible five-decade career, as well as a selection of songs from his highly-acclaimed album, the recently re-released 40th Anniversary CD, Goodbye Yellow Brick Road. 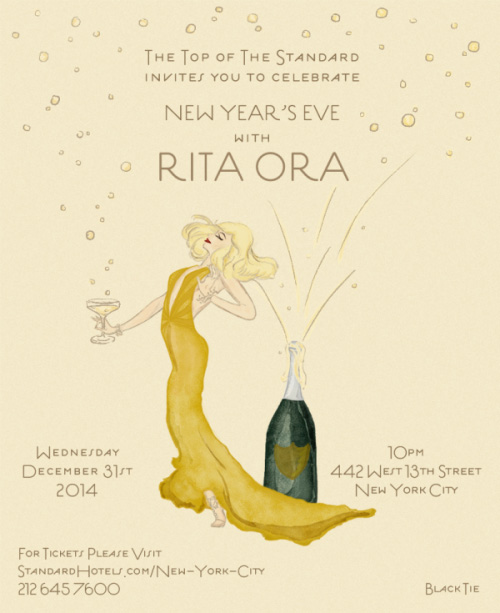 RITA ORA AT THE TOP OF THE STANDARD

Celebrate this New Year’s Eve with the glamorous British singer, Rita Ora, who will be performing at the Top of the Standard. The exclusive event will be black tie only, so you’re the kind of person who likes to dress up for a night out, this is for you. For more information and tickets, visit StandardHotels.com/New-York-City. 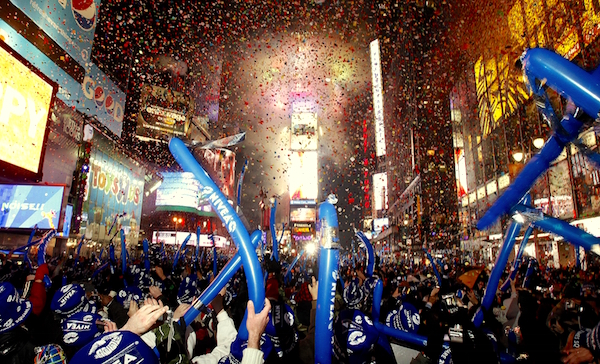 Price: FREE (although try to get there early amidst the throngs.)

Times Square in New York is the place to be on New Year’s Eve, at least once in a lifetime. If you haven’t checked this off your bucketlist yet, 2015 is the year. It has become the symbolic center of New Year’s Eve, with over an estimated one million people there on the ground, millions nationwide, and billions worldwide, all watching collectively as the famous New Year’s Eve Ball descends from the flagpole atop One Times Square. The anticipation is high, as millions hold their breath for the countdown, and break into a cheer as the clocks strike twelve. That’s the way to say goodbye.

In addition to the countdown, there will be pre midnight performances and presentations live, hosted by Ryan Seacrest. It is part of ABC’s “Dick Clark’s New Year’s Rockin’ Eve with Ryan Seacrest 2015,” which will feature Taylor Swift as the headliner, and other guests including Charli XCX, Meghan Trainor, Florida Georgia Line, Magic!, Idina Menzel, Iggy Azalea, and Bastille. In total, the telecast will feature 38 performances and five-and-a-half hours of music and is set to air Wednesday, December 31st at 8 p.m. ET. 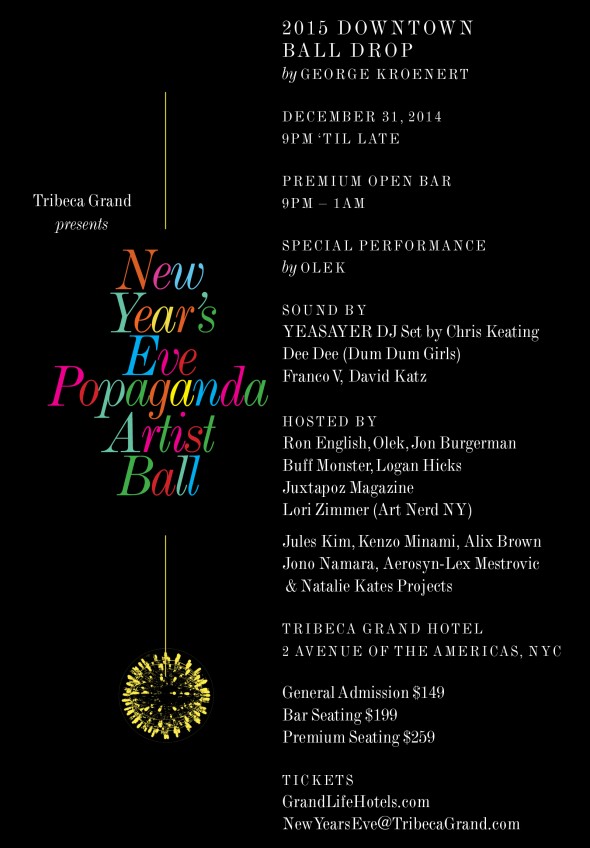 Where:  Tribeca Grand Hotel, 2 Avenue of The Americas, NYC 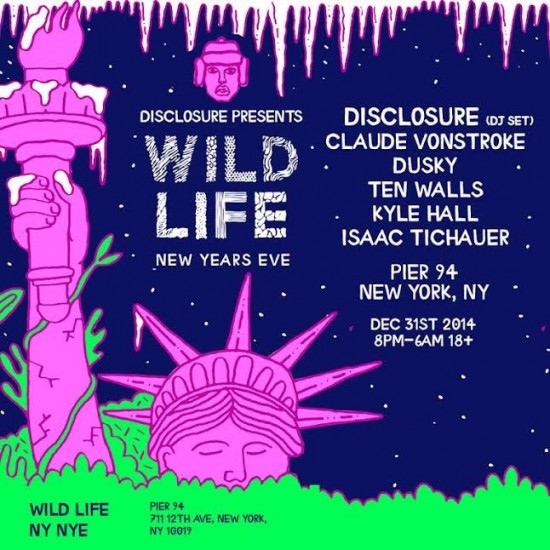 UK siblings and dance music duo, Disclosure, will be playing at Pier 94 as part of their Wild Life New Years Eve 2015 DJ set. 2014 was a great year for them. Their single “Latch” featuring Sam Smith was certified platinum, and their debut album Settle (Cherrytree/ Interscope) was nominated for Best Electronic Album at the Grammys as well as collaborations with the Queen of R&B, Mary J Blige. Joining the Lawrence brothers on the special night will be Dirtybird label head Claude VonStroke, fellow UK duo Dusky, Ten Walls, French Express affiliate Isaac Tichauer, and Detroit’s own Kyle Hall. 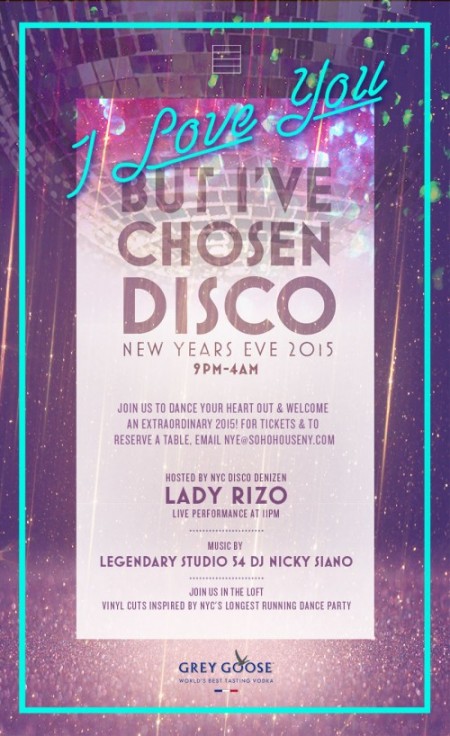 I LOVE YOU BUT I’VE CHOSEN DISCO

Price: This is a private event for hotel guests and Soho House members only. For more information on availability, email nye@sohohouseny.com.

Soho House New York is hosting its 2015 New Year’s Eve Party titled, “I Love You, But I’ve Chosen Disco.” It’s your chance to dance your heart out and give 2014 a solid farewell with some of the classiest party birds out there. Soho House is a members only hotel and club. The event will be hosted by NYC Disco Denizen Lady Rizo, who will also perform live at 11pm. Music by Legendary Studio 54 and DJ Nicky Siano will complete the party atmosphere. 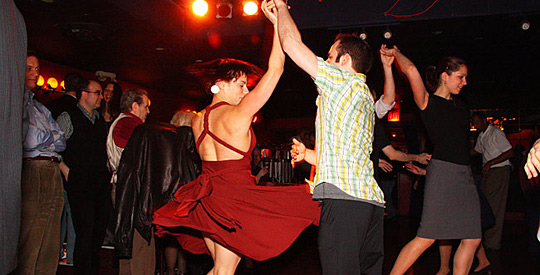 SWING DANCING AT SWING 46 ON NYE

The FloorPlay Swing Vacation Event has been designed as a fun way to celebrate New Year’s. Its focus is not on competition, but if you feel like cutting the rug or tripping the light fantastic this New Year’s Eve with a Lindy Hop, St. Louis Shag, Boogie-Woogie, or Jitterbug, (if you even know what these terms mean,) then the New Year’s Eve Swing 46 is for you. If you don’t feel proficient in your dancing shoes, don’t worry; the Swing46 Jazz and Supper Club will offer lessons-even on New Year’s Eve. It is a five hour, big-band bash with dinner, dancing, a swing DJ followed by a live band, a five-hour open bar, and a bottle of Champagne for a midnight toast. 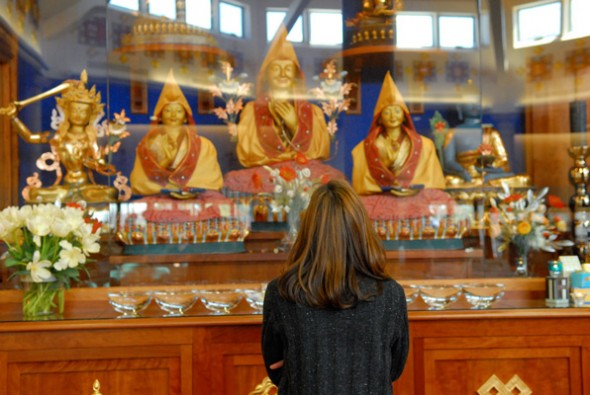 MEDITATION AT THE KADAMPA CENTER

If big rowdy parties are not your thing, you might be interested in a more spiritual way to ring in the New Year. Hors d’oeuvres will be served, and from 10:45 onward, Kadam Morten will offer a brief introduction to the practice of the Buddha of Compassion. A lovely arrangement of prayers and mantras, followed by the practice itself, visit the Kadampa Center for a guided meditation to bring you into the new year. The focus will be a dedication for the welfare of the whole world. Non-alcoholic drinks will be served. 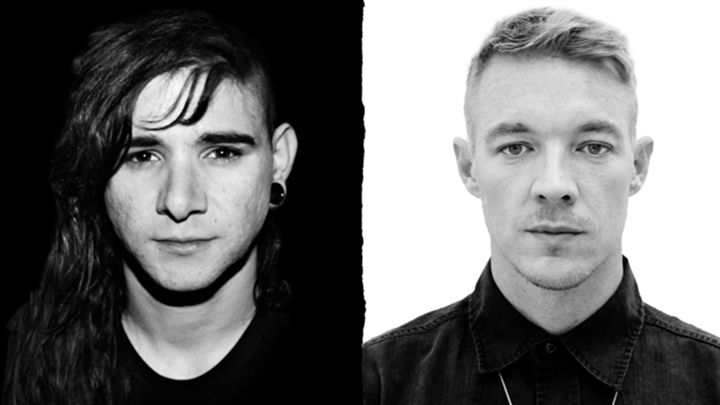 SKRILLEX AND DIPLO TEAM UP AS JACK Ü FOR NYE 2015

It is official: Jack Ü, the duo made up of electronic DJs, Diplo and Skrillex, will be playing Madision Square Garden on New Year’s Eve. Not only that, but apparently both Diplo and Skrillex will also be playing solo sets, along with other artists who have yet to be announced. Look out for them to perform their new song, “Take U There,” featuring the “Hideaway” singer, Kiesza. 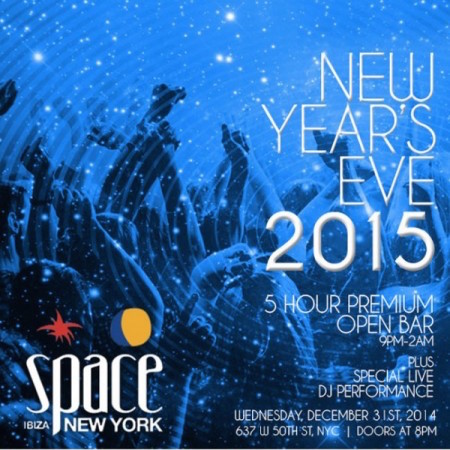 Starting From: Doors open at 8pm

One of the biggest dance venues in New York, and a guaranteed banger, Club Space Ibiza will host its New Year’s Eve party with a special live DJ performance, a 5-hour premium open bar from 9pm-2am, and a safe space to drink and dance to your heart’s content. 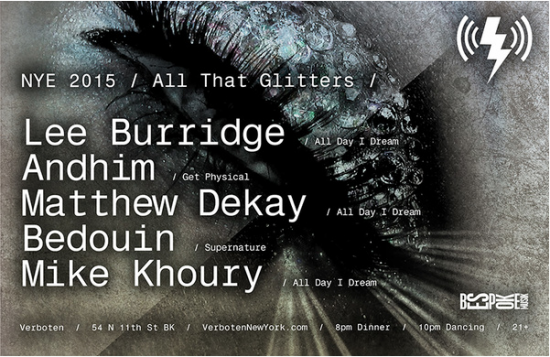 VERBOTEN “ALL THAT GLITTERS” NYE 2015

Verboten’s lineup for its massive New Year’s marathon “All That Glitters” includes Lee Burridge, Andhim, Matthew Dekay, Bedouin and Mike Khoury. The festivities kick off on December 31 with Andhim, Bedouin and Mike Khoury to usher in the New Year, then swings into the late night with Lee Burridge and Matthew Dekay, providing a marathon of the finest underground house and techno to ring in 2015. “All That Glitters.” will see Verboten’s industrial space transformed into a glittering futuristic wonderland. Guests are encouraged to dress in their best silver, mirror or disco ball inspired outfits, and some comfy dancing shoes. An optional pre-dance three-course dinner will be crafted by Chef Chris McLaughlin.