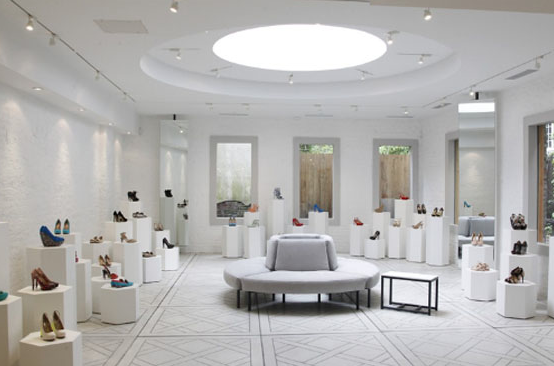 Nicholas Kirkwood, the luxury shoemaker known for his quirky sky-high heels, has finally opened his first American store in Manhattan’s Meatpacking District, only his third store worldwide.  The store, located on Washington Street, is 1500 square feet of shoe-lover heaven that features a similar design to Kirkwood’s recently opened Mayfair, London flagship store, with its own backyard and garden.  Kirkwood described the space, saying, “I like the idea of doing something else that you can kind of walk around and explore it. It kind of has a gallery-esque feeling, without being quite as cold as a gallery.”  Kirkwood settled on the new location in the Meatpacking after not being able to find any streets he liked in SoHo and finding uptown spaces to be too small. Kirkwood sought to place his brand in an exclusive location surrounded by similarly high-end designers, such as other Meatpacking staples, Zac Posen, Ports 1961, Christian Louboutin, and Maison Martin Margiela. The store is centrally located in the chic district, situated next to The High Line park, and neighboring the Whitney Museum of Art, Soho House, and The Gansevoort Hotel. The new boutique will carry Kirkwood’s complete collection in addition to the shoe designer’s collaborations with Prabal Gurung, Rodarte, and the Keith Haring Foundation.