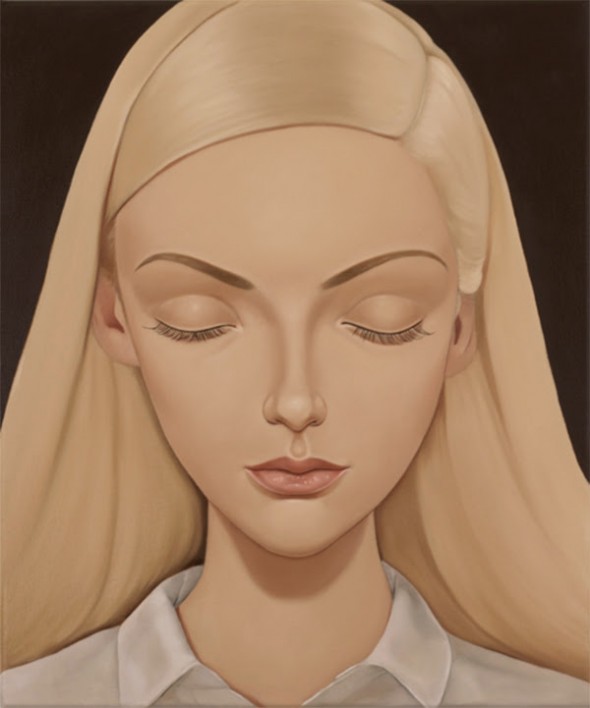 Tracy Williams, Ltd. is presenting Peter Stichbury’s third exhibition with the gallery, Anatomy of a Phenomenon, in succession of his previous solo exhibition, Superfluous Man. The show is titled after the computer scientist and astronomer Jacques Vallée’s 1965 book, investigating and appraising data collected on unidentified aerial phenomena from 1947 until 1964.

In this exhibition of oil on linen paintings, Stichbury examines the data and culture associated with unidentified aerial phenomena as in the case of Japan Airlines, Alaska, 1987.  Pilot Captain Kenju Terauchi transmitted information of an immense walnut shaped object flanking his flight over Alaska of which it and two other objects were tracked on radar from the ground as well as from the plane itself. Terauchi was subsequently grounded.

Mona Stafford, based on the famous Stanford Kentucky Abduction case of 1976, considers the three women who claim to have been taken from a quiet Kentucky road by a UFO and examined by its non-human occupants. Harvard Professor of Psychiatry, Dr. John Mack, who studied the controversial area of alien abduction and coined the term ‘experiencers’, was wholly convinced by the veracity of certain abduction claims; however, conflicting interpretations pervade this area of investigation, including assertions of witness confabulation, sleep paralysis, and false memory syndrome.

Around 95% of ‘sightings’ emerge as homemade tributes to the genuine phenomena, employing a range of props, from barely visible strings, to digital manipulation to produce an image of a sighting.  Multiple factors have derailed widespread scientific investigation into the subject: daily reported hoaxes, the Hollywood-esque portrayal of the subject in cinema as well as wider popular culture, academic ridicule, and government investigations including the 1968 Condon Report.

The resulting demotion of the subject to folklore status leaves behind the flimsy shell of a subject, permeated by half-truths, hoaxes, misidentification and government disinformation, while the truth is pushed further out of reach.

General Nathan Twining, Head of U.S. Air Force Materiel Command wrote in The Twining Memo, September 23, 1947, “The phenomenon reported is something real and not visionary or fictitious.” Jacques Vallée agrees that the reality of the phenomenon is undeniable, but posits that its origin may challenge popular interpretations, suggesting it could be inter-dimensional, rather than extra-terrestrial in nature.  Other evaluations consider the possibility of military deep, black stealth projects, co-opting UFO folklore to cloak it from public knowledge.

Stichbury uses the tension between the eccentric world of ufology and serious academic inquiry to consider more universal human drives: the push to fully comprehend the human species’ place in the universe, to address the perception of isolation, to demystify and quantify the unknown. From these issues emerges the consideration of where absolute truth ultimately lies, amongst motive, memory, and strategic positioning.

MICHAEL K WILLIAMS GETS CANDID IN AN EXCLUSIVE INTERVIEW

0
The Untitled Magazine October 6, 2014
No Comments Yet