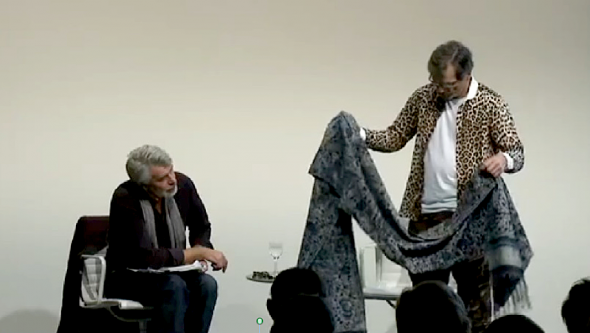 Pace Gallery announces a solo exhibition of new work by Richard Tuttle on view at 32 East 57 Street from February 7th to March 15th. This year will mark the 50th Anniversary of Tuttle’s first solo show in New York which was held at the Betty Parsons Gallery. In the Pace exhibition, Richard Tuttle will present the drawings and studies he created in preparation for his forthcoming commission for Tate Modern’s renowned Turbine Hall opening in October 2014.

Richard Tuttle, a collector of textiles from around the world, has focused and expanded his knowledge beyond his collection to understanding the material from its inherent qualities to the extrinsic factors caused by the chemistry of the dyeing process. As the 2012-13 Artist in Residence at the Getty, Tuttle used the occasion to design three textiles and he recently traveled to India to have them fabricated. This material will inform and serve as the foundation for his upcoming exhibitions.

Richard Tuttle revolutionized sculpture in the 1960s by challenging preconceived notions of the genre through his use of everyday materials such as paper, rope, plywood and cloth. While first utilizing cloth, Tuttle’s experiments led him to make a variety of irregular shaped canvases that were dyed and stitched. This ongoing exploration began with First Green Octagonal (1967), an early work conceived as a drawing of a three-dimensional structure in space. Tuttle reflected about the 1967 works in a recent conversation with Tate Modern Director Chris Dercon, “I would choose a material and look at it to try and get out of it the thing that both satisfied my interest and explored that material simultaneously.”