The sisters behind Rodarte, Kate and Laura Mulleavy, have undertaken their biggest project to date, designing costumes for the Los Angeles Philharmonic‘s production of Mozart’s Don Giovanni led by Gustavo Dudamel and starring Mariusz Kwiecien.  Although this is the designers’ first opera, it’s their second time designing for the stage, the first being, of course, the incredible Swan Lake costumes for Darren Aronofsky’s Black Swan.  Once again, they will collaborate with Swarovski, working with them to create the six showpiece costumes in Don Giovanni, which include headpieces, gowns, and wigs all of which incorporate over 130,000 Swarovski elements. 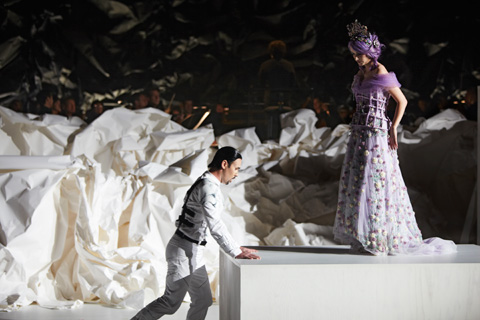 Kate Mulleavy discussed with Women’s Wear Daily the making of the costumes, saying, “It took a while to understand the characters, their motivations and what we wanted to visualize. Frank [Gehry, who is designing the sets] told us from the beginning that it was about the music, and our job was to help that. The costumes are the kind of thing that you want to lift the music — you don’t want to compete or kill it.”  The Mulleavys were interested in collaborating with Gehry, creating costumes that complimented the ideas underlying his set designs.  Rodarte created two beaded gowns for each leading lady that incorporated silk, sequins, and extensive hand embroidery.  For the men, they created chest plates with a hand-painted marble finish and straitjacket shirts mimicking armor made from denim, a first for the designers.  The Mulleavys have been working with the opera on this project for a year now, to get the look of the performance just right. When speaking of the challenges of costume design versus fashion design, Laura said, “You are working with material that is so classic that everyone knows it, so you’re starting from a ground point that’s already decided for you.”  But Rodarte has proven, year after year, that they excel most when given the chance to put their fresh perspective on iconic and historical works. 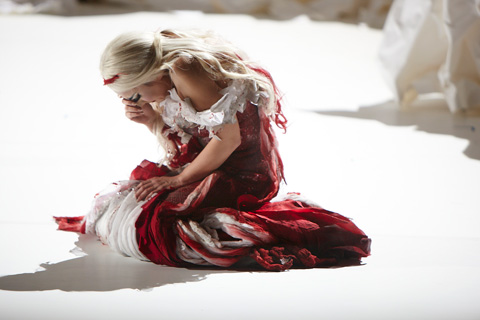 “Don Giovanni,” the first installment of the Philharmonic’s three-year Mozart/Da Ponte opera project, will be performed at the Walt Disney Concert Hall, in Los Angeles, California on May 18, 20, 24, and 26.