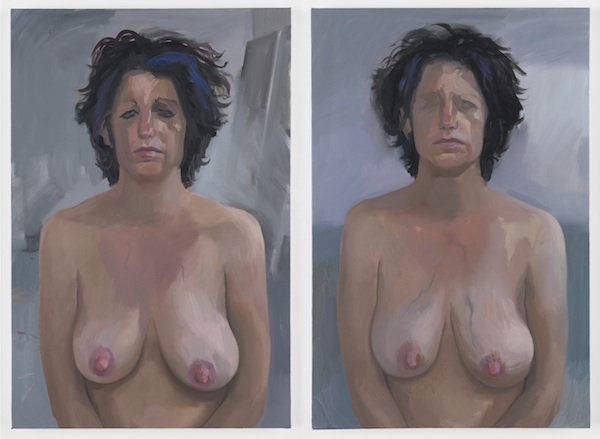 You don’t know the artist Brad Jones? Well there’s really no one to know. There isn’t a Brad Jones. He’s a psuedonym for the artist pair, Jennifer Rubell and Brandi Twilley, both women. They will be showing their collaborative paintings, titled “Diptych,” and featuring Jennifer Rubell as a nude, for the first time at Sargent’s Daughters, through December 7th.

The series began as more of a conceptual piece, with Jennifer Rubell seeking male artists to paint nude portraits of her in order to both critique the male gaze and the myth of the aggressively masculine male painter. She would become “The Nude,” and in a sense dehumanized by being made the object of a painting. She  put an ad on the website of the New York Foundation for the Arts looking for eight different male artists to paint her, and she received hundreds of responses, but she says she kept coming back to the work of one woman, and that was Twilley.

Instead of “a kind of painting gang-bang,” as Rubell thought the original concept was going to be, the paintings became more of a collaboration. Rubell sat as the model, and Twilley painted her. Sitting straight, front facing, Rubell pose “is a pose of equality with the viewer,” she says. “I’m staring right back at you. It’s a pose in defiance of the traditional female pose. And at the same time it is a nude portrait rather than a nude painting. It’s specifically me, it’s a depiction of an individual rather than just a nameless nude.” The style of painting was Twilley’s choice. Two by two, the paintings are paired in similar styles, but some diptychs are more realistic, while others blur certain body parts, or are more abstract but still feature a predominance of flesh colors.

Casual viewers at the gallery, seeing the name “Brad Jones” on the vinyl, would never guess that it evolved from eight men painting a woman to one woman painting a woman, which is part of what Rubell wanted for the work; that engagement of the viewer and how we signify art according to who makes it. She said, “We wanted a name that recalls, to me, some macho Midwestern guy who’s probably a handler at the Gagosian right now, but someday, it’s going to be the name of a great painter.”

They said they chose a male name because “you look at wall labels in museums all around the world most of them are male names.” Rubell also said that it “wasn’t so much a statement about women not being at whatever level, it’s more just that chances are that if you have some great painter, for a variety of reasons, that painter’s name is going to be some white guys’ name.” Hence the birth of Brad Jones, hailed in the press release as “the next sensational, aggressive American (male) painter.”