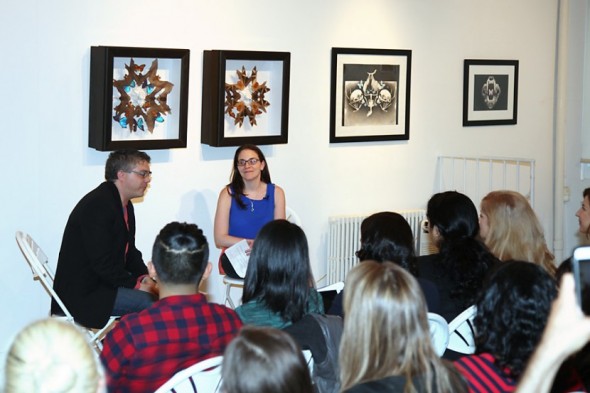 On June 9th The Untitled Space hosted TEDxNewYork‘s #SciConvo, a conversation on science and culture led by particle physicist Ben Lillie and Virginia Hughes, science editor of Buzzfeed. The salon style evening started out with wine and light bites, followed by the conversation style discussion on the subjects of science, culture, media, sexism in science, and a host of other interesting topics that were explored revolving around the theme of the event.  The talk was presented with the latest exhibit of the gallery on display, Mortem//Papiliones, featuring work by artists Joseph Grazi and Indira Cesarine.

A few great quotes that spiced up the conversation included:

“Never try to do stand-up comedy about science, by the way.” — Life advice from Ben Lillie

“50% of scientific studies are likely to end up being wrong.” — Ben Lillie

“We get a lot of women scientists saying ‘finally.’” — Virginia Hughes on the reaction to pieces about sexism in science.

“We tend to think of science as disconnected from culture.” — Ben Lillie

“I don’t know how much the news dictates public opinion. I think most of the time it’s the other way around.” — Virginia Hughes

Read more about the event on TEDxNewYork’s blog.