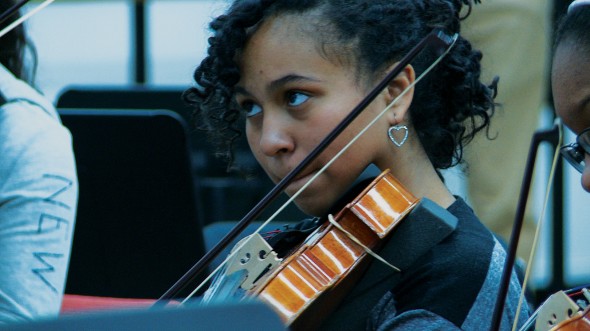 Two years ago the documentary Brooklyn Castle very quietly arrived in limited release – a staggered rollout focused on independent theaters in select metropolitan areas around the country. Despite a lack of financing, Katie Dellamaggiore’s documentary would go on to win the hearts and minds of critics, representing – as it did – an apt reflection of the intermediate school it chronicled. Dellamaggiore introduced cinemagoers to a tight-knit group of students, many of whom were from low-income, minority households. This group became united via one goal: to win the junior national chess tournament. Since arriving on the scene back in 1999, I.S. 318 had won more national chess titles than any other middle school in America. Adolescent members were competing to become some of the youngest grandmasters in history, perhaps even candidates for college scholarship and more. Meanwhile, 318’s board was facing significant budget cuts, setting up an irresistible set of circumstances for any documentary filmmaker.

Some Kind of Spark – a documentary which will have its premiere on Sunday, November 16th at the SVA Theatre in New York for DOC NYC Film Festival– is not nearly so fortuitous. The film sets out in an identical fashion (i.e., six kids, each of whom hail from indigent, minority households, competing for an opportunity to become part of Juilliard’s music program), but winds up far too hunkered down by limitations. Of the half-dozen students who are profiled, the endearing ones aren’t talented, the talented ones aren’t endearing, and there’s very little binding the entire group as a collective. Add to that the fact a lot of the exteriors were shot during inclement weather, with almost everything being filmed in natural light, and what you end up with is a film that’s much more honest than it should be entertaining; much more sullen than it should be full of verve.

Whereas the students of Brooklyn Castle were engaged in a make-or-break struggle across multiple fronts, the students of Some Kind of Spark find themselves utterly consumed with attempting to play the right notes. There’s something at stake here, sure, but it’s minimal, at best, perennially buffered by the film’s lack of engagement. Toward the end, we discover that a few of the documentary’s participants have been accepted into Juilliard’s pre-college division, accolades that are handed out like specks of dust between the closing credits. It’s the type of thing that leaves a bitter aftertaste, if not the sense Some Kind of Spark will not ever have what it takes to play Lincoln Center … or perhaps even an independent cinema, for that matter.