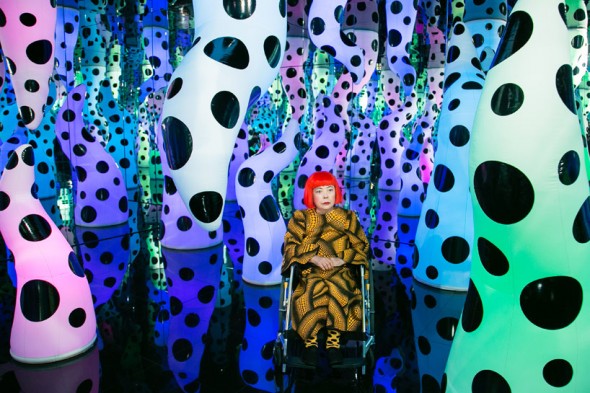 Japanese artist, Yayoi Kusama is currently featured at the David Zwirner Gallery – Yayoi Kusama: I, Who Have Arrived in Heaven. The current exhibit is labeled as one of the final “must-see” exhibitions of the year.

Painter, novelist, and sculptor, Kusama has been unfailingly fixated with polka dot patterns since a young age. Interesting enough, Kusama has lived voluntarily in a psychiatric institution since 1977 while battling her obsessional complexity. Kusama is a well-known precursor of the pop art, minimalistic, and feminist art movement. She was a heavy influence upon contemporaries later on such as Warhol and Oldenburg. Although, she was phased out during the late 1970s, Kusama is stepping into the limelight once again, as an important voice of the leading avant-garde crusade.

Using her repeating spot motif, Kusama has been creating fantastic paintings in watercolors, pastels and oils since 10 years old. The Yayoi Kusama: I Who Have Arrived in Heaven is featured at the contemporary art gallery’s 19th Street location.  The New York desire to avoid the hordes of spectators that tend to congregate at the major exhibits has gravitated to Chelsea. It’s celestial Infinity Mirrored Room – The Souls of Millions of Light Years Away, is the most favored portion of mine. Beware of the lines. Luckily I went opening day, the line was less than a five-minute wait. But be prepared to ache in the pestering winter winds for a concisely, 45-second timed exhibit. The Infinity Room features 75-colored LED bulbs in a mirror-lined room. As for the ‘tentacle room’, the installation popularly regarded by Instagrammers, is a mirrored room of polka dot inflated rubber biomorphic forms that undergo changes of color.

Yayoi Kusama was also featured at the Whitney Museum last year; her ‘Firefly on the Water’ installation was mesmerizing to say the least.

Currently at 83 years-old, the multimedia artist has collaborated with Parisian fashion house, Louis Vuitton just last year. The limited collection of leather goods, ready-to-wear, accessories, shoes, watches, and jewelry debuted in July 2012 under the name ‘Infinity Kusama’. Dots, are a repetitive theme in her art, a visual representation of the hallucinations and anxiety attacks she has suffered since childhood. Marc Jacobs, Vuitton’s creative director first met Kusama in ’06 and was immediately attracted to her obsessive character and the innocence in her artwork. The collaboration was a prosperous venture for the luxury brand. 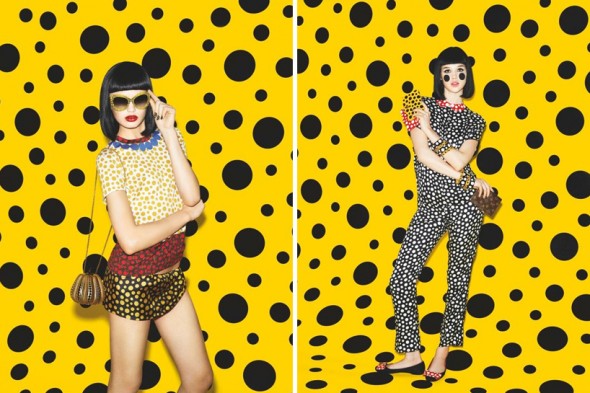 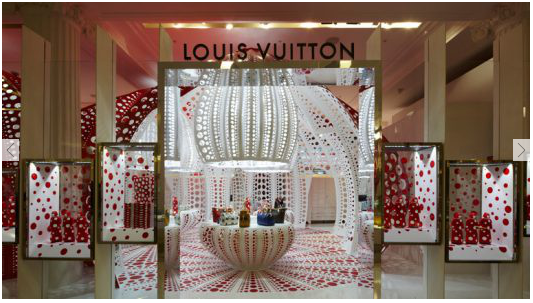 THE AQ/AQ 12 DAYS OF CHRISTMAS DEALS