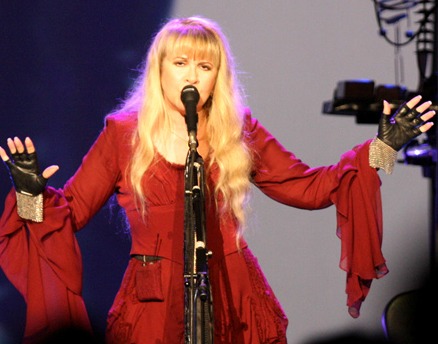 Rock legend Stevie Nicks, fresh off of Fleetwood Mac’s sold out worldwide tour, will be releasing her intimate DVD documentary “In Your Dreams” on December 3rd.

“In Your Dreams” is a portrait of the illusive Nicks as she and Stewart embark on a musical journey to write and record the critically acclaimed “In Your Dreams” CD , Nicks’ first studio album in over a decade. Nicks called this “the greatest year of my life” and felt compelled to share the joyful experience with her fans. The DVD is currently available for preorder.

Co-produced and co-directed by musical wizard Dave Stewart, “In Your Dreams” was shown at The Hamptons International Film Festival, Mill Valley Film Festival, SXSW and Toronto Film Festival, and had a theatrical release in 53 cities.

The inner life of the legendary Nicks has by her design long been kept at a distance from the public.. We learn in “Dreams” that her world features costume parties, elaborate dinner feasts, tap dancing, fantasy creations and revealing songwriting and recording sessions all of which are captured on film. Fans will also get to see cameo appearances by Edgar Alllan Poe, Mick Fleetwood, Reese Witherspoon, a massive white stallion in the backyard, owls and naturally a few vampires who appear in several “home movie” style music videos.

Along with tracking the Nicks/Stewart creative partnership, “In Your Dreams” has plenty of other cinematic payoffs including rare never before seen personal scrapbook stills from Nicks’ childhood and a wealth of candid backstage and performance shots taken over the last 35 years.

The documentary was produced by Dave Stewart’s Weapons of Mass Entertainment.

Stevie is scheduled to appear at a DVD signing in Los Angeles on December 4th at Barnes & Noble at The Grove in Hollywood at 7:00 pm.

ECLECTIC STYLES FROM AHTIANI, OUTSIDER, AND FUNLAYO AT WOLF & BADGER