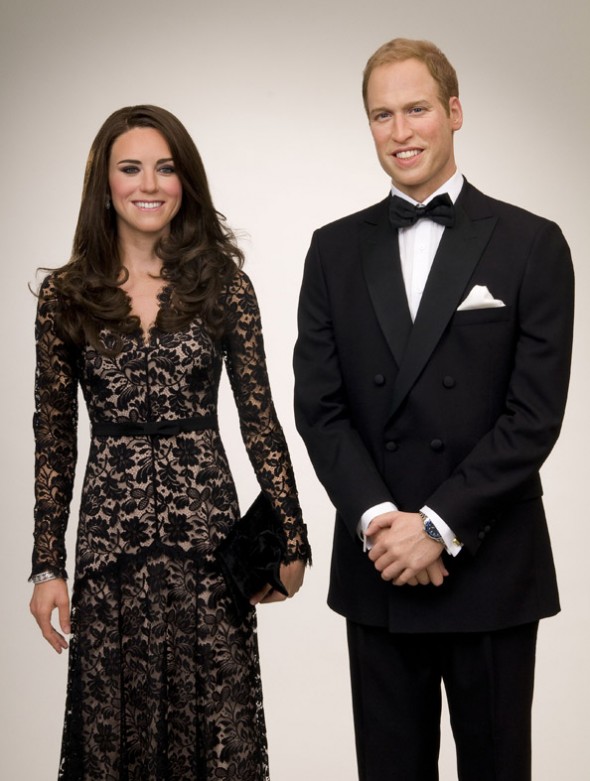 On April 4th, Temperley London, in collaboration with Madame Tussaud’s, presented a new Catherine Duchess of Cambridge wax figurine dressed in the label’s designs, which was created in honor of the one year anniversary of Catherine and Prince William’s marriage.  The Temperley London figurine shown at Madame Tussaud’s in London is just one of four figures that will be launched globally, each portraying a different outfit linked to a memorable royal occasion.  The Temperley London Duchess of Cambridge will debut in Amsterdam dressed in the custom made black lace gown, inspired by the label’s pre-Fall 2012 Long Ariel Gown, which was worn to the premiere of War Horse on the eve of the Duchess’s 30th birthday.  The London, New York, and Blackpool articulations of the wax figurine will be dressed in Issa, an Alexander McQueen gown, and Jenny Packham, respectively.  After its premiere in Amsterdam, the Temperley London figurine will go on tour to all of the Madame Tussaud attractions throughout the world.  Tussaud’s has a long tradition of replicating the royal family, going back 180 years to when Madame Tussaud first opened her doors in London, featuring a figurine of King William IV.  Each figurine of Catherine Duchess of Cambridge takes a dedicated team of artists four months to create and costs around £150,000 each.

GET READY FOR AUSTRALIAN FASHION WEEK IN SYDNEY APRIL 30-MAY 4, 2012

TURN ME ON DAMMIT! INTERVIEW WITH DIRECTOR JANNICKE SYSTAD JACKOBSON

YOU WILL NOW GET CARDED TO BUY ART IN THE U.K.

13 UNIQUE INTERNATIONAL MUSEUMS TO PUT ON YOUR BUCKET LIST