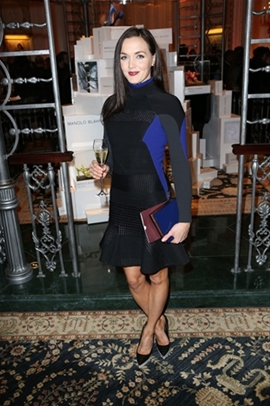 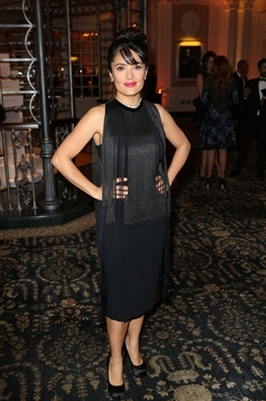 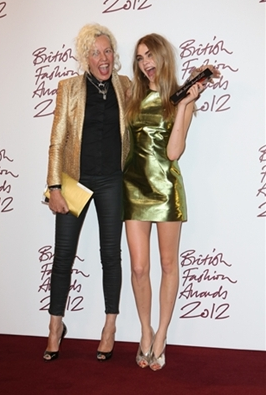 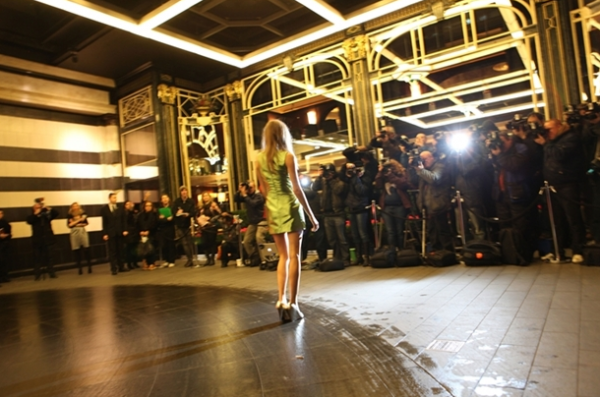 The British Fashion Council today announced that Stella McCartney has been named Designer of the Year, receiving the highest accolade at the British Fashion Awards 2012. Stella also received the Designer Brand award on behalf of her eponymous label, picking up two awards on the evening, both of which recognize a momentous year for the designer through her achievements in the fashion industry and her contribution to Team GB in 2012.

The evening saw 14 awards presented to the leading figures in fashion, recognising creative talent and design excellence across all areas of the industry. Hosted by Gemma Arterton and Nick Grimshaw at the Savoy Hotel and theatre, the British Fashion Awards were attended by industry leaders, retailers, models, celebrities and media supporting both the winners and nominees of these prestigious awards. Guests on the evening included BFC Ambassador Samantha Cameron, Harold Tillman CBE, Valentino, Manolo Blahnik CBE, Stella McCartney, Sarah Burton, Christopher Kane and Alexa Chung.

Harold Tillman CBE, Chairman of the British Fashion Council, commented “The British Fashion Awards are a significant event which represent the culmination of extraordinary talent, creativity and innovation across the whole industry. The ceremony provides the perfect conclusion to what has been an exceptional year for British fashion and we’re very proud to celebrate the achievements of all the nominees here this evening.”

Mr Tillman was honoured on the evening with a Special Recognition award for his term as Chairman of the British Fashion Council and contribution to the fashion industry. In light of the award, Mr Tillman commented “The last five years have been extraordinary and seeing the BFC and the fashion industry go from strength to strength is a reward in itself so it is completely unexpected to be given this award.  My term as chair ends in just a few weeks time and I am so grateful to all those at the BFC and our designers who have inspired and supported me in equal measure. It has been an honour to serve this great industry for so long – Thank you all.”

The honour of Outstanding Achievement inFashion was awarded to Manolo Blahnik CBE. This special award is one of the most significant of the evening; it celebrates and recognises one designer, who throughout their career, has made an impact on the global fashion industry and the award pays tribute to Manolo’s extraordinary career and contribution to fashion.

Professor Louise Wilson OBE received the Isabella Blow Award for Fashion Creator, in recognition of her creative inspiration and influence in the fashion industry. Professor Wilson celebrates her 20th anniversary this year as Course Director of the Fashion MA at Central Saint Martins. She is internationally revered as one of the foremost educators of her generation, whose graduates populate the fashion houses of the world. Her vast contribution to the reputation of the British Fashion Industry can be measured by the fact that 30 names on schedule at London Fashion Week this September alone are her alumni, including Christopher Kane, Jonathan Saunders, Roksanda Ilincic, Marios Schwab, Louise Gray, Michael Van der Ham and Simone Rocha.

The Accessories award is the most prestigious accolade which can be won by a leading British designer of shoes, jewellery, millinery or accessories. This year’s award went to Nicholas Kirkwood, in view of his iconic shoe designs and internationally acclaimed business.

The hotly contested New Establishment award was won by Erdem, who over the past two seasons has continued to raise his profile over the past year receiving critical acclaim for his collections from a global audience.

Kim Jones was awarded the honour of Menswear Designer of the year for the second year in a row, based on his contribution to the menswear industry and most notably for his work at the helm of luxury fashion house Louis Vuitton’s menswear ready-to-wear line.

Cara Delevingne picked up the Model award, in recognition of her contribution to the international fashion scene over the past year. A Burberry model since 2010 and currently the face of Chanel, Cara’s unique sense of style and flair in front of the camera has made her one of the most prominent names in fashion, walking in an impressive 31 shows in September after being described as the star face of autumn/winter 13 by British Vogue. She most recently graced the catwalk in the iconic Victoria’s Secret show.

Roksanda Ilincic was the recipient of this year’s Red Carpet Award. Industry figures and celebrities alike including the Duchess of Cambridge, Samantha Cameron, Michelle Obama have graced the red carpet in her creations, creating a global awareness of her designs in the media.

The British Style Award brought to you by Vodafone recognises an individual who most embodies the spirit of London and is an international ambassador for London as a leading creative fashion capital. Decided entirely by the public, Alexa Chung has been voted as this year’s winner.  This is the third time Alexa has been recognised at the British Fashion Awards for her style credentials, and she remains the sole winner of the British Style Award since its introduction in 2010.

This year’s British Fashion Awards sponsors were American Express, Canon, M.A.C, TONI&GUY and Vodafone. The BFC would like to thank Apartment 58, Hello! and Mercedes-Benz.

0
The Untitled Magazine November 28, 2012
No Comments Yet