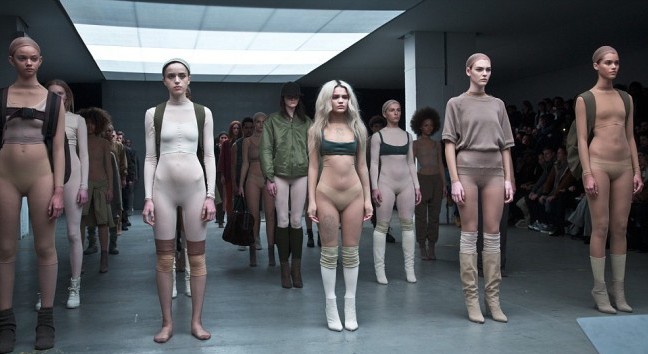 Kanye breathes controversy. From his over-the-top constructed cocky persona, to political statements, to his marriage to arguably the most infamous woman of our time, Kim Kardashian: Kanye West is controversy. Despite a personality that has sailed a thousand memes, he stays at the top of our playlists, the tips of our tongues, and now folded in our drawers and hung in our closet with his new collection for Adidas. The reason for his persistent cultural impact across art platforms: talent. West is the evil genius of the century.

Diehard fans have shown his collection so much love, his shoes selling out in just one second of their release, while fashion critics were divided; some found merit within the  bodysuits and earth toned color scheme, but many among the fashion elite found a lot to hate. Critics have labeled the musician’s first foray onto the runway as a “joke” and a “disaster.” Although it could be a matter of taste: Fashion Week creator Fern Mallis said she is not a fan, adding that the rapper is “not my style.”

Kanye’s collection with Adidas, shown in New York on February 12th, the first day of Fall/Winter Mercedes-Benz Fashion Week, rose from the ashes of a poorly received ready-to-wear collection shown in Paris in 2011/2012. This round, West reportedly focused more on pieces of necessity than style. Inspired by the London riots, the dark green, darker-beyond-what-could-be-described-as-a-hunter-shade-green, a rather original color is most impactful in the shredded unisex sweatshirts, indeed invoking imagery of a renegade running from a political street brawl. 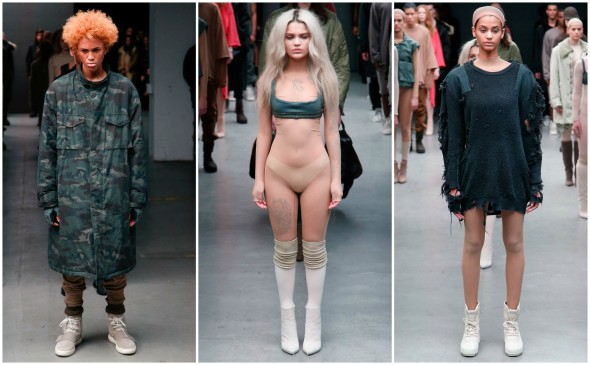 Continuing the collection’s foray into earth tones are the nude body socks, shown stretched over female bodies of various shapes. The tattooed curvy blonde, the rail-thin classically beautiful brunette, by binding them together in nudes and whites, West invokes perhaps the strongest theme of the collection: military. Vests resembling police-grade bullet proofs are paired with leg warmers, and camouflage jackets hang over scrunched sweatpants.

Much of the criticism of the collection (after removing the usual West backlash) is over the bareness of it all. Perhaps the best critique comes from a Twitter user: “I feel like Kanye is the 2015 version of ‘The Emperor’s new clothes.'” All alone, the pieces do hold a nakedness to them, yet with several seasons, and a parade of celebrities out-doing one another to embellish to the absurd, minimalism has become the look that warrants waving a true freak flag. Last year, the horrendously labeled “normcore” and “goth punk” trends were coined – perhaps the Kanye West x Adidas Collection is the right take on minimal athleticism to appease the fashion world’s backlash on over-embellishment.