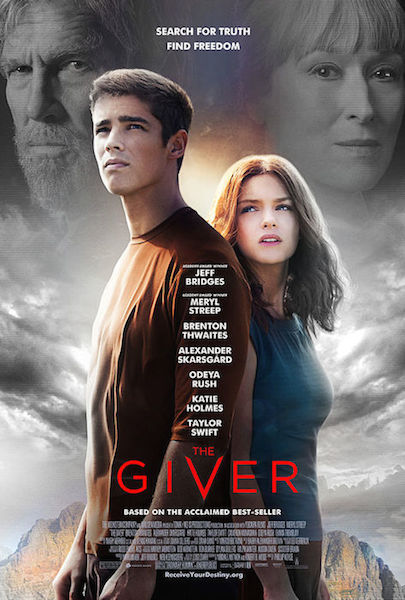 The Newbery-winning book The Giver is something like a children’s super-novel.  More than 10 million copies of The Giver have been sold, with dozens of translations (Czech, Hungarian, Thai) and the title is a staple on the middle schooler’s English syllabus.  Lowry, who is now 77-years old, still receives fan mail for the book on a day-to-day basis.  While most of the novel’s fans read The Giver for the first time in middle school, it’s become one of those crossbreed books that are marketed as “a story for everyone.”  Set in the semi-distant future of “sameness,” the world in Lowry’s novel is a world where words like “love” and “family” are treated like expletives, deviants are “released” to Elsewhere, and adults take daily injections to suppress carnal behavior.  This is the world where we meet Jonas, played by Australian actor Brenton Thwaites, in Phillip Noyce’s film adaptation of the novel, which was produced for a scant $20 million.

The narrative follows Jonas as he embarks on the most important year of his life—the 12th year: when all Twelves are given their life-long assignments or roles in society.  Unlike his friends Asher (Cameron Monaghan) and Fiona (Odeya Rush), who have the more conventional and expected assignments as recreation directors and caregivers, Jonas is fated for the most honorable position in society: The Receiver of Memory.  The Receiver (Jeff Bridges) carries all of history’s memories, making him the wisest, and inevitably, most dangerous individual in the community.  But to Jonas, The Receiver is The Giver, and thus, the story’s title.

Training to be The Receiver, Jonas is now allowed privileges that set him apart from his peers, the most important one being “you may lie.”  As Jonas learns more and more about the world’s history, which gets transmitted to him by way of The Giver grasping his forearms, he develops feelings and opinions, and his black-and-white world starts to have color.  Slowly, but surely, the emotional weight of the world’s past time infects Jonas and his seemingly perfect society starts to look not so perfect anymore.  You know where this story is going next, right? 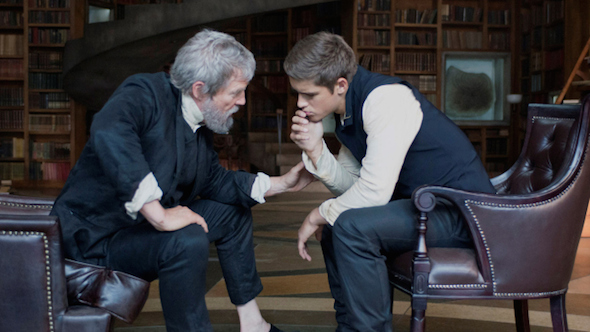 The film’s strength can inarguably be attributed to the film’s director.  Noyce’s choice to film the beginning of the movie in black-and-white, and allowing color to seep into the picture as Jonas begins to see color, is a technique taken straight from the book, and is visually very satisfying (unsurprisingly, 1998’s Pleasantville found its aesthetic influence from Lowry’s novel).  This makes the long-panning shots from bird’s-eye of the “community” landscape, which was filmed in South Africa, that much more gorgeous once Jonas starts recognizing all the different hues of red, blue, yellow, green.

Adaptations are in themselves an art form, and Noyce’s translation of Lowry’s beloved book to motion picture is pretty accurate.  Although there are some changes, the movie remains true to the novel’s themes, which is more or less what a good adaptation does.  In the age of Vine and Snapchat—fleeting images and videos—our image comprehension has sped up tenfold.  Noyce takes advantage of this by throwing reels of quick two to three second videos at us whenever Jonas is learning a new sensation through receiving memory.  When The Giver gives him strength, what we see on the screen is river rafting, trudging through the Sahara, protests, a lot of protests.  The mish-mash of videos he carefully curates for each emotion relies solely on the associations we have with seeing the images.  Although the “children” in this film are much older than the ones in the book, we’re still experiencing the nuance of being sentient just as Jonas does when he conjures a memory.

This is a part coming-of-age story and part allegory.  It’s a story that covers pretty much every existential quandary you can have: sameness v. individuality; happiness v. pain and suffering; obedience v. free will.  Near the end of the film, Meryl Streep, who plays a cold-blooded Chief Elder, argues in support of the new society, saying, “When people have the freedom to choose, they choose wrong every single time.”  So why not enjoy the easy, beautiful, serene life in the community where there are no changes and difficulties?  As Jonas innocently asks near the start of the film, “Why would I want to be different?”

Call it survival of the fittest or a social construct, but the awareness of difference, or Other, is, as Hegel taught us, an integral part of our self-consciousness.  In order to identify the I, there needs to be the Other to contrast it.  It’s a painful truth about being human, but it’s also a wonderful one.  Because to be able to identify difference is to be able to perceive one’s existence and the value of that existence. 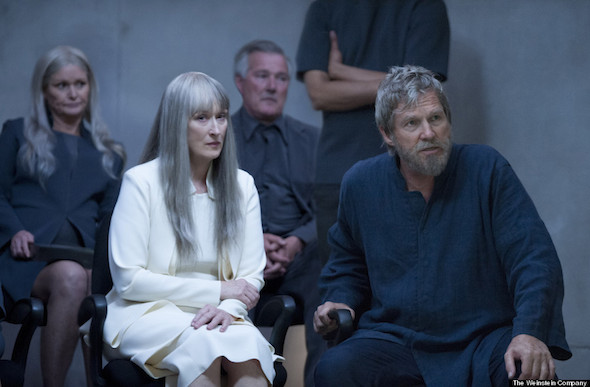 While Noyce is the director—and quite a good one at that—it’s quite apparent that this project is Bridges’ baby.  He’d been working on the project for twenty years.  Twenty years!  Rush, who plays the ingénue Fiona, wasn’t even born when Bridges began the excessively long project.  Silver, a producer, acquired the rights to the property more than 15 years ago and had already been in contact with Lowry, so when she and Bridges finally got together, the movie was finally on its way to being on the big screen.  The biggest problem with having taken so long to produce this film, however, is that it’ll likely be received poorly.  Lowry’s smart and compelling novel may be one of the pioneers for dystopian children’s lit, but its adaptation is coming out after an already extensive canon of other dystopian children’s lit-to-flicks: The Hunger Games, Ender’s Game, Divergent.  But, then again, had they made this film in 1994, would it be as visually stunning as it is now?  Probably not. The movie has all that it takes to be a popcorn crowd pleaser, and under the circumstances of the low budget, will most likely be highly profitable, whether critics like it or not.

The Giver also features Alexander Skarsgård, Katie Holmes, and a very brief cameo from Taylor Swift.  The movie will be out nation-wide on August 15th, 2014.  See the trailer below.