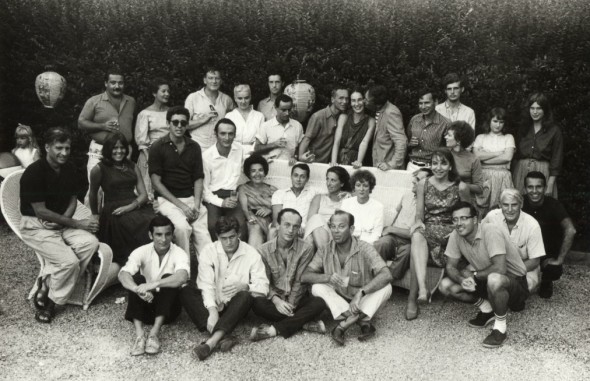 (Art)Amalgamated will present the exhibition Flying Point Beach: The Photographs of John Jonas Gruen and Artwork of The New York School at their gallery in New York from May 17 to June 9.  The exhibition will feature over 25 photographs by John Gruen mixed in with paintings from notable Hamptons artists including Fairfield Porter, Jane Wilson (John Gruen’s wife), Larry Rivers, Jane Frelicher, and Willem de Kooning.  Gruen was a photographer and culture writer who photographed the artistic scene that exploded in the Hamptons in the late 1950s and early 1960s.  As art and music critic for The New York Herald Tribune, Gruen cultivated an ever-growing circle of famous, talented friends and found himself in the position to document what was going on.  Gruen, before becoming a critic, had trained professionally as a photographer  at the Rapho-Guillumette agency under famous artists such as Brassai, Kertesz, Doisneau, Sabine Weiss and Man Ray.  As half of a New York art scene power couple, Gruen felt it was his responsibility to capture this burgeoning artistic movement and invited his famous friends to his Hamptons’ home near Flying Point Beach.  The result was a collection of iconic, personal images of some of the greatest, enigmatic artists of that time.  The exhibition of these photographs at (Art)Amalgamated, placed side by side with some of the artists’ drawings and paintings highlights the talent and longevity Gruen was able to see in his friends long before the art world took notice.

Flying Point Beach: The Photographs of John Jonas Gruen and Artwork of The New York School will be open from May 17 to June 9 at (Art)Amalgamated, 317 10th Ave., New York

Emily Kirkpatrick for the Untitled Magazine