Hip and cool are not the first two words we think of, when we think of the Catholic Church. It acts rather like the disapproving father, telling pop culture off like it’s a wayward rebel teen. But the Father of the Catholic Church, Pope Francis, has taken up a more accepting stance towards the world at large. He has been stepping across Church boundaries ever since he was a young Jesuit Priest going by the name of Jorge Mario Bergoglio. Raised in Argentina, he’s the first Pope to come from a Latin American country, and the first to choose “Francis” as his name — after St. Francis of Assisi, the gentle monk who took on poverty and talked to birds. He’s also the first Pope to take a selfie.

Since being elected Pope on March 13, 2013, Francis has gained the respect and attention of more than just those within the Catholic Church. Perhaps it’s because he is willing to engage with those outside of the Church. Even as a Cardinal, he was known to promote inter-faith ceremonies. Take for example, the November 2012 meeting of Jewish, Muslim, Evangelical, and Orthodox Christian leaders, whom Francis brought together to pray for a peaceful solution to the conflicts in the Middle East.

Pope Francis has shown his willingness to engage in not only religious diversity but also cultural diversity. The Vatican’s 2014 Christmas concert is scheduled to include none other than the Godmother of Punk, Patti Smith herself. Hearing the words “punk music played in church” recalls the incident in 2011 when the punk band Pussy Riot staged a guerilla performance in an Orthodox church in Russia, and were subsequently arrested for it. Patti Smith, however, was invited personally by Francis, and says she has great respect for him and for the Bible. I have a good feeling her performance won’t end in arrest.

It is also his unassuming nature that has made people love him. Let’s be honest; we can get a little sick of celebrities. Real personalities that we feel we can connect with are becoming much more popular than glamorized, idealized versions of people. The revolution of personal vlogs, which get millions of views on YouTube, show how much people want to know that public figures are real and down to earth. Francis brings that relatability to the office of the pontificate. He’s a real guy who just happens to be Pope. It is known that one of his first jobs was as a bouncer. He still often drives his old car, rather than going around encased in a guarded, chauffeured vehicle. He has also confessed to moments of mischief: he once took the rosary off of a dead priest. 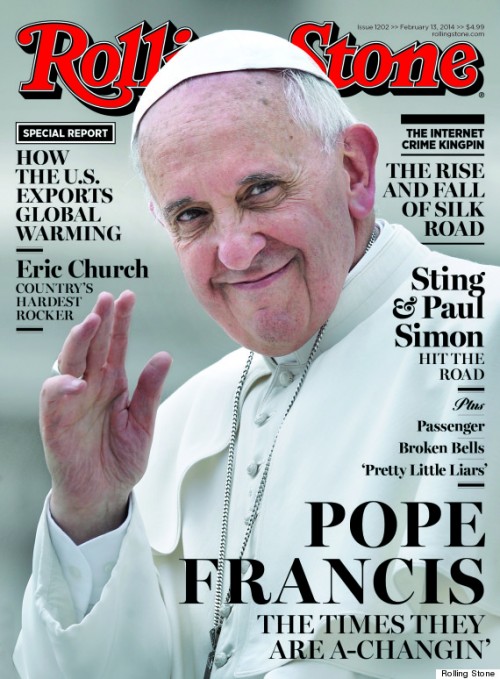 The five little words that largely started pop culture’s love affair with the Pope were spoken in a press conference not long after he was elected. In response to a question about his stance on homosexuals, he answered, “Who am I to judge?” Elton John praised the Pope for his words, and many others also thought that it might’ve meant the Catholic Church would soon loosen its stance on homosexuality. Because he’s willing to engage in the dialogue of culture, people are more willing to hear what he has to say. Pope Francis has appeared on countless magazines, not only the usual Italian and Catholic ones, but also The New Yorker, Life, The Advocate, and on the covers of both Rolling Stone and Time as person of the year. 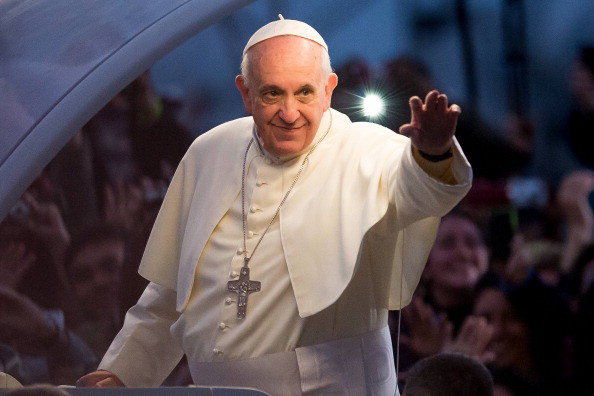 Some traditional factions of the Catholic Church don’t like how Francis is behaving either. They don’t want change. But the Pope is changing things up within the Church. He fired the five-man board of the Vatican’s financial watchdog in June in order to break with the old guard. He fired the head of the Swiss Guard just a few days ago in December, due to allegations that the Swiss Guard was being too strict and pompous. On one occassion, the 77-year old pope is said to have emerged from his private rooms to find a Swiss Guard that had been standing outside his door all night. He told the young man to have a seat and rest, but the soldier said, “I can’t, it’s against orders.” The Pope then replied, “I give the orders around here,” and then went to get the sleep-deprived guard a cappuccino.

These actions have led to the public’s depiction of the Pope as a hero for justice. Just in the last months, it has become a trend for graffiti artists to use the Pope as their subject. In Rome, there is Pope Francis as a superhero, with his white robes flying out behind him like a cape, rosary swinging, carrying a valise with the word “Valor” emblazoned on it. This is a Pope who, by his inclusive message, is encouraging people from all walks of life to listen to each other. If you walk on from the superhero wall to the Spanish Steps, you can see Pope Francis giving you the thumbs up.

– Lydia Snyder for The Untitled Magazine