New York Fashion Week Ready to Wear Spring 2016 brought us tulle, greyscale, (except for Jeremy Scott, of course) 90’s grunge throwbacks and hair that stood upright. Among all to be talked about, enjoy looks from our top ten shows. 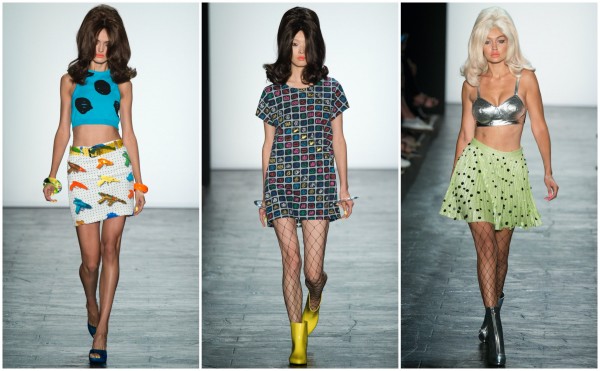 B-movie horror wigs, neon guns, and fishnets – Jeremy Scott played with textures, color, and metallics with as much enthusiasm and irreverent comic gusto as we’ve come to expect from the designer. The models strutted like sci-fi club kids in the next generation of Scott that we can expect to adorn all your favorite pop stars, and keep color alive in the upcoming months in a sea of grey and blacks. 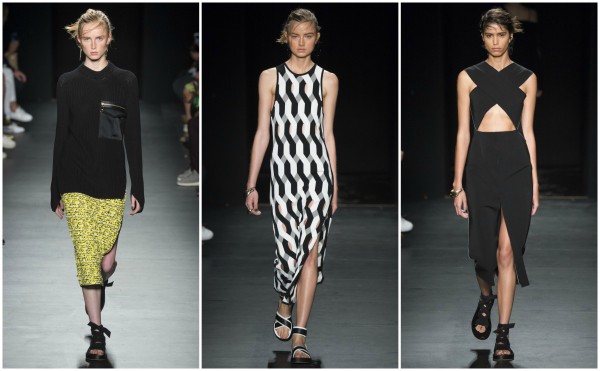 Staying on brand and showing in Brooklyn, Rag & Bone designers David Neville and Marcus Wainwright threw back to the 90’s with sportswear, sandals and a military-aesthetic drapped in canary yellow – complete with hoop earrings. 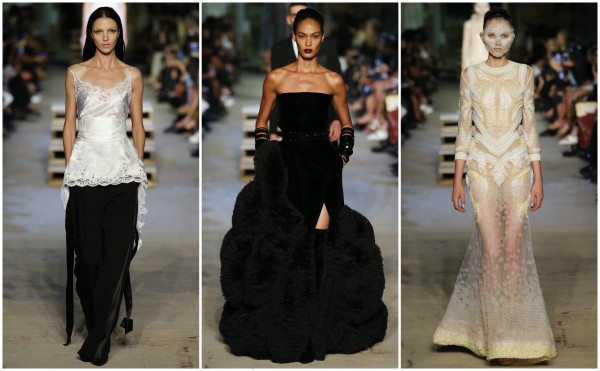 There were a legion of rumors leading up to the Givenchy show: Would Kanye show a collection as Kim’s Instagram hinted? Would Caitlyn Jenner walk the runway? No, on the crowded show held on the anniversary of 9/11, reality  TV did not infiltrate the runway, although mourning and a collaboration with Marina Abramovic did. The collection was elegant and romantic, lingerie-inspired tulle and lace presented in classic oatmeal tones and black. It was an impeccable collection with correct sensibilities for New York City by Riccardo Tisci. 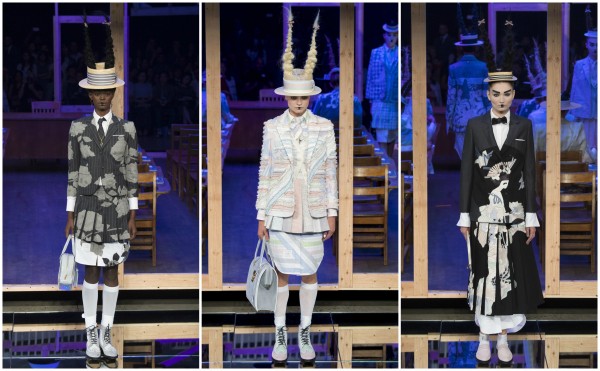 With a micro color palate of greyscale to pastels and hair that stood upright like antlers, Thom Browne showed a heady and whimsical layered medley drawing  inspiration from Japanese schoolgirls to The Wizard of Oz. Odd and eclectic, yet wearable once deconstructed, Thom Browne continued his reign as our favorite micro-manager with a clear vision and intricate tailoring. 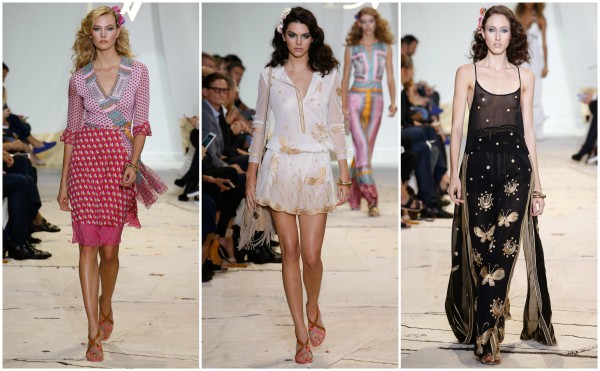 On the tails of the 40th anniversary of the wrap dress that made her an icon, Diane Von Furstenberg stayed true to form with floral patterns, embroidery, and feminine upgrades on her staple looks. The show was named “Fortvn” for the Roman goddess of luck – and the first painting Von Furstenberg ever bought. With a run like she’s had, it’s working. 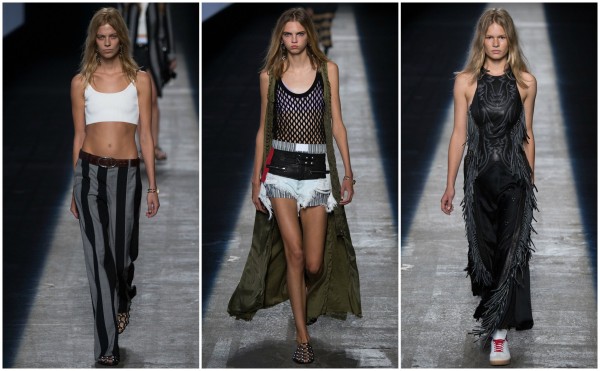 While Alexander Wang’s questionable after party garnered more attention than his collection, there’s no denying the man knows womenswear. Style wise there was tremendous pressure, following his exit from what was a rather short stint at Balenciaga. His own Spring 2016 Ready to Wear collection was perfectly on point, distressed fringe, bomber jackets, and signature mesh tanks perfect for the it-girl who knows that grunge is back. 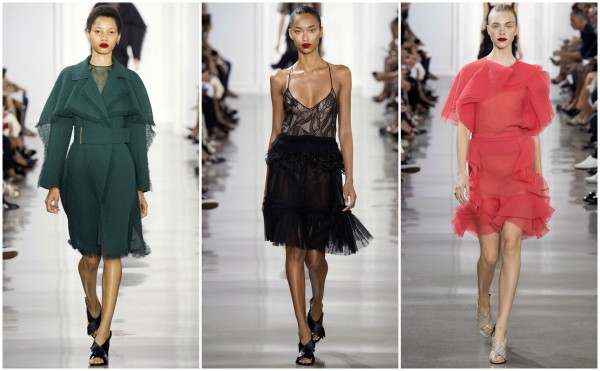 The designer who made his name with gowns took a more minimalist approach this season, classic tweed jackets embellished with a bit of distress, a sportswear spin on the little black dress, and folds and frills on a well-placed use of the color coral. 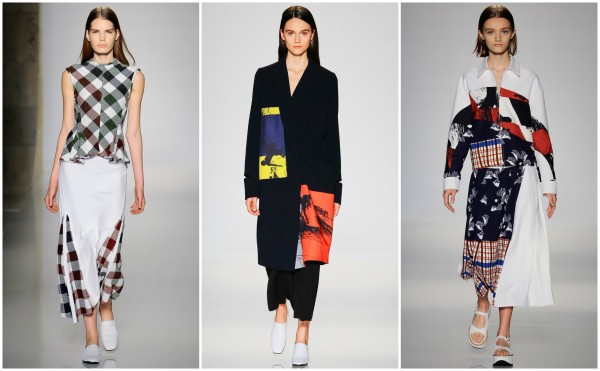 When Victoria Beckham was introduced to the world as a designer, it was all about lady-like classic and fitting silhouettes and heels. Her Spring 2016 collection, loose fitting garments paired with flats, minimal makeup, and complete with surf prints show the designer’s laid back evolution. 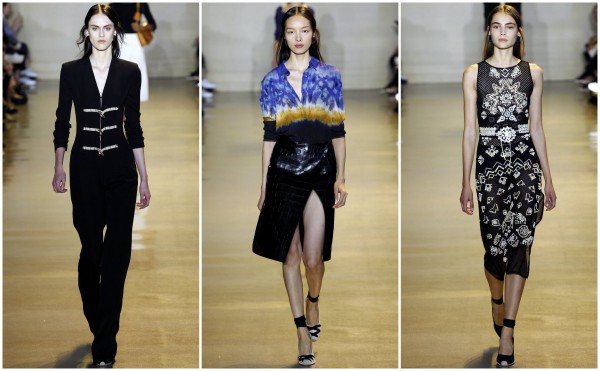 The young designer’s collection reportedly dived into his heritage for the inspiration for this collection, the 32-year-old has roots in the Basque region of northern Spain. From nautical cat suits to espadrilles, and a rich color scheme of shades of blue and sunset orange, we think the collection would look lovely off the runway in New York as well as the Spanish mountains. 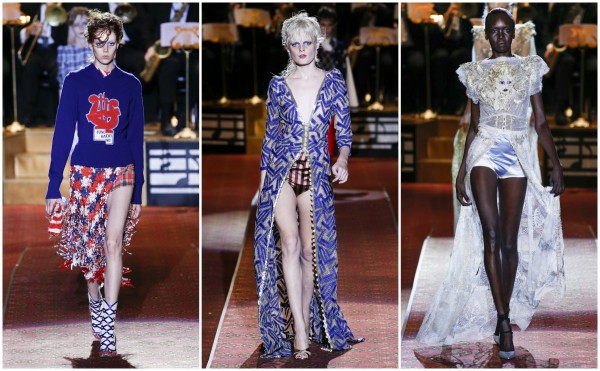 Closing out fashion week was Marc Jacobs, in a display on par to the opening notes of Givenchy’s 9/11 show. Held in the famous Ziegfeld theater, the show was complete with pop corn, a blazing marquee, and ushers with Playbills. The show was inspired by the movies and Americana. Distressed sweaters and messy hair further demonstrated that grunge is back, yet bright embellished blues and high shoulder dresses proved that glamour need not be sacrificed to create a collection Courtney Love would die for.

TREE OF CODES - WELCOME TO THE ART RAVE