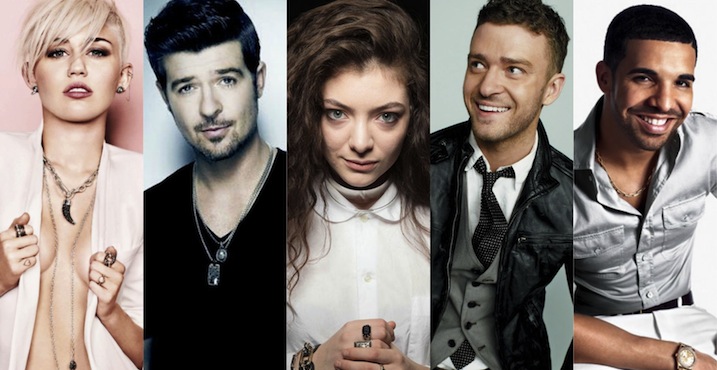 In 2013 we saw Miley Cyrus transform from Hannah Montana into a sultry, provocative songstress, we saw Robin Thicke stir up controversy and break records with his ‘Blurred Lines’ video, we also saw (and heard) Kanye West, Lorde, and Drake. All of the antics and gossip about these musicians aside, what truly matters is their music – The Untitled Magazine has compiled a list of the top 10 songs of 2013 based on their impact, their catchiness and the amount of times that they were each stuck in our head throughout the year.

Miley Cyrus debuted “We Can’t Stop” as the first single off of her album Bangerz and the feedback was record-breaking. Not only did the single top charts but her music video also garnered over 300 million views on Youtube. The singer promised that it would be the song of the year before it was even released and it’s hard to argue with her statement as the song was everywhere in 2013.

Lorde, 2013’s breakout artist, graced us with her gorgeous voice in her first single “Royals“. The relatively unknown young singer from New Zealand released ‘Royals‘ and almost instantly the single was topping charts across the world. Shortly after the single skyrocketed above seasoned artists on iTunes, she released her album “Pure Heroine” – which also received the same positive feedback.

Drake‘s single “Hold On, We’re Going Home” was arguably one of the catchiest songs of the year. The single came in second to “Started From The Bottom” to be released as a single – both songs went on to become number 1 hits for the rapper. Bottom line: any feel-good song that brings our spirits up when we’re feeling down deserves a spot on our top 10 list.

Justin Timberlake continues to prove that he’s not going anywhere – releasing his phenomenal single “Mirrors” was validation for the music industry that the new King of Pop is here to stay. Timberlake’s 8-minute-long song was released as a surprise for fans after his performance at the 2013 Grammy Awards and quickly topped charts. The song is a subtle nod to the “FutureSex/LoveSounds”-era Timberlake and fans, radio stations and charts ate it up.

We dare you to listen to Pink‘s duet with Nate Ruess (lead singer of Fun.) and not sing along. “Just Give Me a Reason” became 2013’s ‘sing in the car at the top of your lungs’ song – and the majority of us did just that. The ballad is both catchy and beautiful at the same time, making it one of our top songs from 2013.

Lady Gaga, despite having less-than-great record sales this year, gave us a hit with her single “Gypsy.” The single may be one of the lesser-known tracks from her album “Artpop“, but it’s very much reminiscent of the ‘old’ Lady Gaga-style. The ballad, backed by heavy guitar and drums, is a nostalgic song that, lyrically, is very similar to Bruce Springsteen‘s hit “Thunder Road“. “Gypsy” makes our list for it’s catchiness and overall feel-good vibe.

Robin Thicke‘s “Blurred Lines” makes our list as the one song that consistently remained stuck in our head throughout the year. Not only was it just named the best-selling song of the year, but the single made Thicke a household name – helping the sales of his album that also dropped last year. The music video for Blurred Lines became one of the most talked about videos of the year landing second to our next single…

It goes without saying that 2013 was Miley Cyrus‘ year. Making our list a second time for her single “Wrecking Ball“, Miley scored the #1 most viewed video on Vevo – breaking records. Wrecking Ball was the second single off of Bangerz – a ballad of broken love, the song stirred rumors of Miley’s personal problems which, in turn, brought more viewers and purchases of the song.

Beyoncé shocked the world (and crashed iTunes) when she released her self-titled album completely unannounced. “Drunk In Love” is translated as a follow-up to the 2003 hit “Crazy In Love” featuring Beyoncé’s husband Jay Z. The single debuted at #12 on Billboard‘s Hot 100 Chart, tying with “Ring The Alarm” as the singer’s highest debut throughout her career. The song went on to top charts worldwide.

Kanye West had a fairly eventful 2013 – getting engaged, having a baby, and releasing his album Yeezus that sparked his current tour. If you owned a t.v. last year, you’d have heard “Black Skinhead” on trailers for The Wolf of Wall Street just about every single commercial break. The single, which showcased an angrier Kanye than what we’re used to, became a hit for the rapper and landed him in top 100 charts across the world.