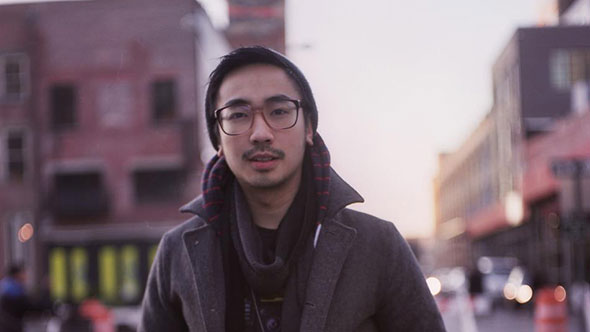 On a nippy fall night in New York, producer Antonio Cuna, better known as Sweater Beats, sits in a plush V.I.P. area above a popular Manhattan nightclub where he’s soon set to perform. Only five minutes earlier, he was outside, convincing the club’s bouncer to let him in.

It’s a telling sign of where the 26-year-old Maryland native currently stands in the music industry; he’s neither known nor unknown, teetering on the line between relative obscurity and popularity. On the one hand, he’s slowly becoming one of the most exciting producers of the down-tempo, electro-influenced R&B genre, touring the world and releasing records on touted labels like Red Bull London and Justus. On the other, he hasn’t yet made an actual cent off any of his music.

That will soon change with the release of his debut, That Feel EP, an album that will demonstrate his continued growth as a producer as he moves farther away from conventionalism and more toward experimentalism. But to Cuna, it’s never been about the money anyways. Instead, it’s been about creating something genuine.

“I’m just trying to put something out that is part of me,” he tells The Untitled Magazine as he gets ready for his show, which is part of the CMJ Music Marathon. “I want to have people listen to my stuff that they know is coming from my heart.”

Cuna has been playing it close to the heart since he was a child, when his father, a bossa nova jazz head and guitarist, used to play Brazilian funk records around the house. Cuna developed a passion for music as a result and was in a number of bands as a teenager, playing guitar and writing angsty emo songs reflective of his life in suburbia. Eventually, he got more into pop music and the work of innovative producers like Pharell, Daft Punk and Timbaland, who he still cites as a hero today.

Despite his love for playing, however, Cuna never contemplated the idea of pursuing music as a career path. Instead, he went off to college to become a graphic designer – a “safe plan A,” he remembers. That all changed when a school friend showed him “Cherry” by Ratatat, a record that would inspire him to start producing on his own.

“I thought, ‘I want to make this,’” he says. “I’m going to try to do this before it’s too late and see what happens.”

With no real expectations, Cuna bought Reason, a computer program for creating and editing music, and started making beats. He began chopping obscure disco samples and mashing them with vocals by mainstream pop artists. Over time, he started to use less samples and more live instrumentation, creating icy pieces of complex R&B. Eventually, his work caught the ear of English production duo Bondax, which agreed to release one of his singles – the glitchy, Whitney Houston-inspired “MLLN DLLR” – on its label through iTunes.

Since then, Cuna has become a seasoned performer, playing in places as obscure as rural Kentucky to as reputable as the Boiler Room in Los Angeles. He’s released a handful of catchy remixes that have brought a sultry, electro-tinged take to the music of mainstream singers like Rihanna and Ciara. He’s even collected a handful of cool industry stories, like the time he hung out in Perth, Australia, with Australian electronic legend Ta-Ku.

But even with all this, Cuna is still unsure of whether he can call his art a career yet. For every sold out show, there’s still a doorman who doesn’t know his name. He won’t be satisfied, he says, until he’s able to work in the studio with the same artists he currently samples, producing inventive pop music, just like his hero Timbaland. Until then, he’ll continue to make a name for himself by simply being himself, which has taken him this far.

“I try to make music where everything is me,” he tells us, “And I hope people like it.”