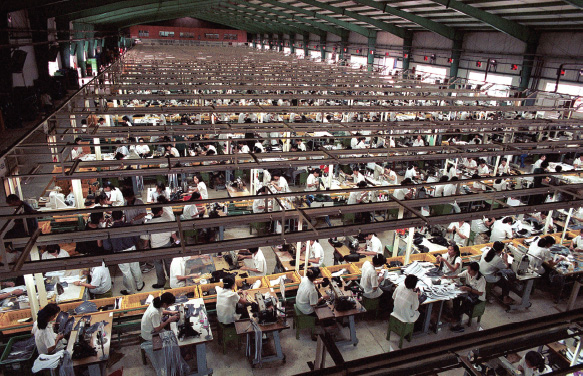 Thousands of Chinese workers employed at shoe-making factories owned by Yue Yuen Industrial in Southern China’s Pearl River Delta area have ceased their manufacturing of major footwear labels like Nike, Adidas, Reebok, Puma, Asics and Converse in protest of unfair wages. The labor dispute, beginning as early as April, came to a head this Tuesday when a mass of protestors gathered in the city of Dongguan after rejecting an offer for improved social benefits. Reports differ, but the crowd of protesting laborers is said to have numbered up to 3,000 of the approximately 40,000 workers on strike.  The strike is currently reaching somewhere around its tenth day, with angered workers demanding improvements in wages, insurance, and contracts. The protest has so far been peaceful apart from a few mild scuffles, though hundreds of riot police armed with helmets, shields, and German Shepherds stand ready.

Workers feel deceived by the $5.59 billion company’s failure to contribute adequately to their social insurance. “The factory has been tricking us for 10 years,” said a female worker. “The Gaobu government, labor bureau, social security bureau and the company were all tricking us together.” A spokesman for Yue Yuen said the firm had agreed to an improved “social benefit plan” on Monday, adding that the business impact had been “mild” so far. He noted that “all the factors including the affordability from the factory perspective” we taken into account.

EXPECTATION VS. REALITY: “GASLIGHTER” BY THE CHICKS