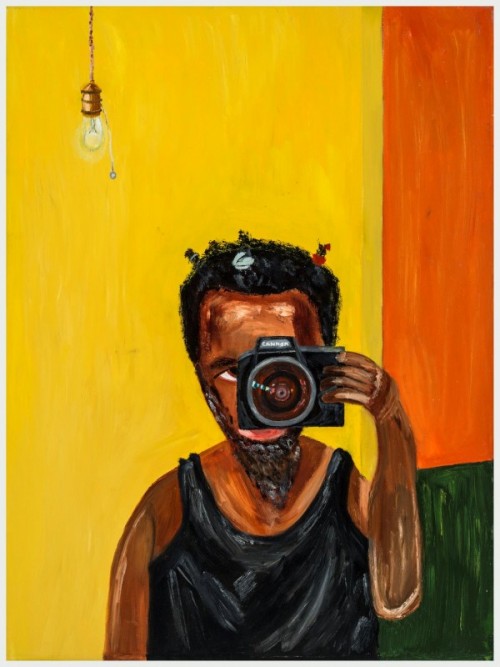 This series marks Vahakn’s first major foray into human portraiture. Between 1990 and 2013, the number of portraits he created could be counted on one hand, with close friends and classmates as subjects. The current series began after the death of one close friend last winter, when Vahakn decided to paint Rene Ricard appreciating—or perhaps biting off—the blossom of a rose bush. From there, the progression from one subject to another followed the artist’s sense of affinity with and admiration for people he knew, knows or knows of.

Vahakn has mild prosopagnosia, a cognitive quirk that makes it difficult to recognize faces. About two percent of the population has it to some degree, Chuck Close among them. In Vahakn’s case, the disorder manifests as a tendency not to recognize people he knows unless he is expecting to meet them. The face of a film’s main character may suddenly be a mystery to him over an hour into the movie. Just as deafness has always had a probable but undefined influence on his work, here it is a gap between physiognomy and identity that points the way for Vahakn’s particular approach. Alongside the expected signals of gaze, stance, expression and underlying affect, another language defines these subjects. To Vahakn, this symbol-set of colors, props and talismanic objects complement the physical and define identity as he understands it.