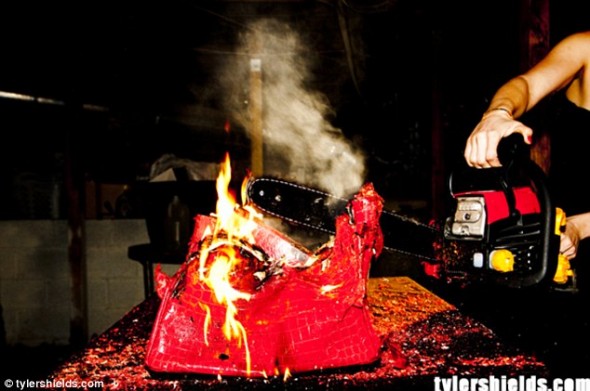 Over Memorial Day weekend, 30-year-old celebrity photographer Tyler Shields, known for his shocking divisive images, posted pictures of his current girlfriend, 19-year-old Francesca Eastwood, daughter of Clint and E! network reality TV star, destroying a reportedly $100,000 red alligator Birkin bag.  The images show Eastwood biting the highly coveted bag, sawing it in half with a chainsaw, and setting it on fire. Shields wrote on his website, “This is the red Crocodile Birkin VS the red $200 chainsaw and 4 dollars of gasoline!…Destruction is a beautiful version of freedom…”  This isn’t the first time the pair have destroyed luxury goods in the name of art, posting images in January of Eastwood drilling, sawing, and setting on fire a pair of Christian Louboutin shoes.  This time, however, there’s been an extreme backlash to the duo’s images which have infuriated and outraged viewers.  According to TMZ, by Monday, Eastwood was receiving thousands of death threats via Facebook and Twitter, most finding issue with capitalizing on this gratuitous waste of money in the name of art, particularly during a time when so many are in great financial need.  Shields has responded to the outrage, retorting that if people are upset about him spending $100,000 for a photo shoot, then they should be upset by every photo shoot or film that has ever taken place.  He said, “It takes money to make art. People spend money to make their work. If I was operating a McDonald’s, would people be upset because I bought inventory?”  He also sited the fact that he too was once poor, and has worked for everything he has and should be allowed to spend his money how he wants.  However, Shields did say that if someone wants to buy one of the Birkin photos, he would be happy to donate $100,000 cash to one family in need, tax-free. But huge sums of money aside, the question remains: is this art or just an act of senseless waste designed to garner media attention? With Shields new book, Richest Man, being released this Wednesday and his girlfriend’s television premiere only a week old, most likely the latter. 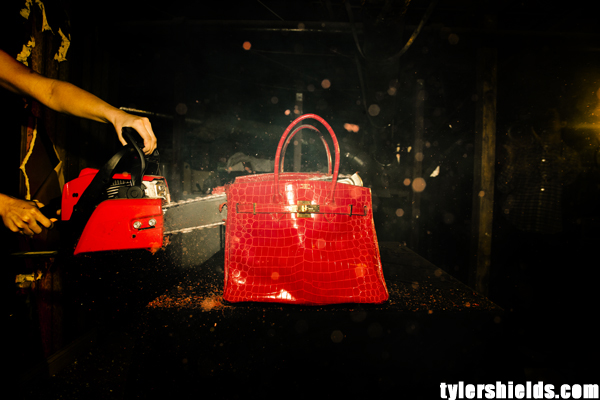