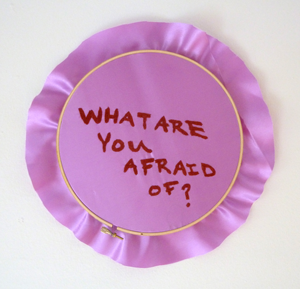 (Art) Amalgamated is thrilled to present Frances Goodman’s first solo show in New York, Touched. Recognized as one of South Africa’s leading young artists, Goodman has become well known for her multi-media works that explore issues of female identity in ways that are often humorously dark and cryptic. By looking at everyday obsessions and behavior she explores the way people respond to our contemporary, highly materialistic society and the often idiosyncratic coping mechanisms they develop.  Her work reflects a morbid ambiguity of excess and loss, a dislocation between appearance and truth.

For her first solo exhibition in the United States, Goodman combines works made in New York during her recent residency at the ISCP (International Studio and Curatorial Program) with older pieces that embody her expansive art career. This exhibition reflects Goodman’s interest in wordplay and humor through text. Touched has multiple meanings: to be physically modified, to be emotionally affected or to be a little crazy.  All refer to the processes involved in the production of the works for the exhibition or the implied or assumed state of mind of the artist, characters and participants in the various artworks. 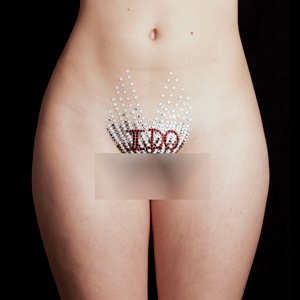 The Vajazzling Series mimics the American fashion trend with the same name (advertized to be done for special occasions). It was both conceptualized and produced in New York using the Village Voice to meet the models – the photographic works of adorned, nude female torsos are a response to the commodification of the female body and its use in the media.  The project aims to take an assertive position on the female form: the women stand proudly before the camera, showing off what is usually hidden in full exposure.  The “I DO” emblazoned across their pubic region is meant to be an ambiguous statement – to be interpreted as a wish? a declaration? a question?

Goodman has chosen to take an American stance with her continuing Revenge Series by using American brand car hoods. The series plays with the stereotype of the emotional, unpredictable, irrational and impulsive woman, whilst also reducing men to the cliché of “you are what you drive” – the hoods become an avatar, the extension of the male ego.

The sound installation Dear Ana is an investigation of eating disorders, and the subcultures they have produced. The tips and letters recited in the work come from websites that are ‘Pro-Ana’, (pro anorexia) girls host online. There exists within the work a reference to desire and addiction, but in this instance the emphasis is on deprivation, rather than indulgence, which intimates that there is a certain amount of luxury implicit in choosing not to eat. Goodman has been working on the Toilet Embroidery Series for a number of years. These philosophies, boasts, confessions and rants that have been photographed in public toilets around the world are reworked into seemingly precious objects, which are at odds with the sometimes lewd and throwaway content. The labor and intensity of hand-embroidering anonymous, dirty nothings into delicate silk samplers reveal a voyeuristic fascination with other people’s sordid fantasies and inner monologues. 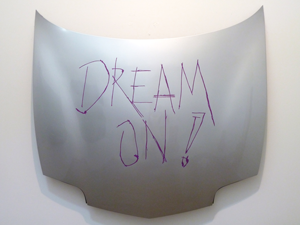