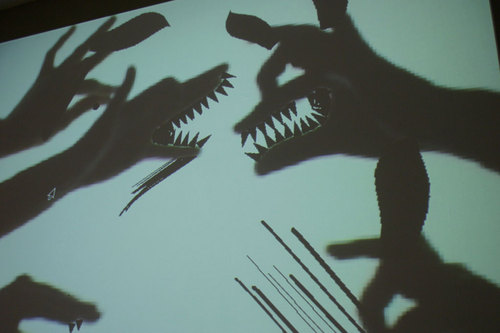 OPEN TO THE PUBLIC DECEMBER 7 – DECEMBER 31

Rekindling the imagination of children and adults alike, Philip Worthington’s “Shadow Monsters” exhibit reopens at The Museum of Modern Art on December 7 through December 31, 2012. With the use of a computer, a camera, two projectors, a light box, and some computer coding, visitors create shadowy creatures to the sound of animal noises made by vision-recognition software.

The presentation works by standing in front of a projector, positioning your silhouette onto the screen. As shadow figures are made, the vision-recognition software picks up the projections and matches it with an animal sound. Worthington executed the first version of this exhibit in 2004, and since then has upgraded his project to visually manipulate shadows upon their initial impression.

Focusing on the experience of behaviors and habits, this display of interaction design is meant to not only spark creativity and amusement for the imagination, but offer a medium for expression. “Shadow Monsters” can be found at the Donald B. and Catherine C. Marron Atrium located on the second floor.

0
The Untitled Magazine December 8, 2012
No Comments Yet

THE MUSEUM OF MODERN ART IS EXHIBITING “PROJECTS: GABRIELLE L’HIRONDELLE HILL” THROUGH AUGUST 15