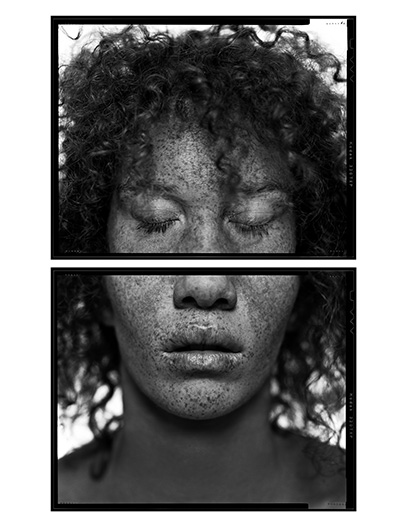 Contributing to the historical narrative that explores issues of gender, agency, and sexuality award winning Director and Visual Artist, Samuel Bayer manifests the complexity of scopophilia – deriving pleasure from looking – in monumental twelve-foot black and white nude triptychs, shown for the first time in his latest exhibit at Ace Gallery Beverly Hills.

Influenced by the aesthetic of Helmut Newton’s celebrated series Big Nudes (1981) and the conceptual nature of Nan Goldin’s video work, Bayer examines the kinship between empowerment and fetishistic voyeurism. Women can be seen confident as they look directly at viewer, in a full-frontal stance, self-possessed, unashamed of being seen nude. They are not objects. However, Bayer’s choice to segment the body into thirds greatly complicates this idea. Are these women a sum of their parts or stylized fragments on view for others to enjoy? Bayer interrogates the idea of female agency, beauty and intention in a time when oversaturation of images is commonplace.

Samuel Bayer’s character aesthetic of grit and rawness was first recognized in 1991 when awarded an MTV VMA in his directorial debut of Nirvana’s video Smells Like Teen Spirit. For the next two decades Bayer continued to produce memorable still images alongside his music videos, film and commercials. He directed countless award-winning pieces for a long list of musicians including; Aerosmith, David Bowie, Maroon 5, Marilyn Manson, The Rolling Stones, Pat Benatar, and The Ramones. Bayer’s work is the permanent film/video collection at the Museum of Modern Art in New York City.

In 2005 he took home three VMA’s for his work with Green Day, directing Boulevard of Broken Dreams, was nominated for a Grammy and honored with the MVPA Lifetime Achievement Award. In 2007 he won another VMA for his Justin Timberlake What Goes Around..Comes Around video and the MuchMusic Best International Video Directing Award.

Bayer was also honored with a People’s Choice Award for Favorite Horror Movie Direction of Nightmare on Elm Street, the film grossed $117mm worldwide with a budget of $30mm, holding the number one spot at the US box office for the first week of release and introduced Rooney Mara in her first major studio role. In 2011, his Super Bowl video for Chrysler, Born Of Fire, featuring Eminem, received an Emmy and a Cannes Gold Lion. Super Bowl 2013 he directed four different commercials including Stevie Wonder and Zoe Saladana for Bud Light. Bayer continues to work commercially with a variety of brands including; Adidas, BMW, Coke, Nike, T-Mobile, and Mercedes. He currently lives in Los Angeles with his wife Ericka and son Ziggy.

PUNK: CHAOS TO COUTURE AT THE METROPOLITAN MUSEUM OF ART - NEW YORK - MAY 9 - AUGUST 14