As always Art Basel Miami this year was steaming with people. It seemed busier than ever before, with queues around the block to buy tickets to get into the Convention Center.  Open from December 2-5th, it featured over 250 leading international art galleries with artworks by over 2,000 artists. With the XXXX Magazine, “The Untitled Magazine,” Voyeur exhibit opening on December 3rd, I didn’t have a lot of time to spend reviewing the works at all the galleries, but I did manage to spend a half day checking out some of the more interesting art on display.  Booth after gallery booth (they all look the same after a while!), you get dizzy after reviewing 25 or so galleries, and the whole experience can be rather overwhelming.  It is an incredible site to see so much contemporary art in one setting, yet at the same time the over-abundance of the works also seems to depreciate the individual works of art, as there is just too much to see to absorb the essence of each oeuvre. I definitely prefer the private gallery opening to the art fair experience, but equally it is worth checking out what everyone is up.

NADA Art Fair (New Art Dealers Alliance), founded in 2003, is always one of my favorite art fairs to check out while in Miami for Art Basel, as the exhibiting galleries feature primarily emerging artists rather than the established names that dominate at the Convention Center. One of my favorites at Nada was the booth set up by The HOLE Gallery, run by Kathy Grayson and Meghan Coleman, both former directors at the legendary and now-closed Deitch Projects. They created a living room environment out of their booth which definitely stood out amongst the crowd of white wall galleries. 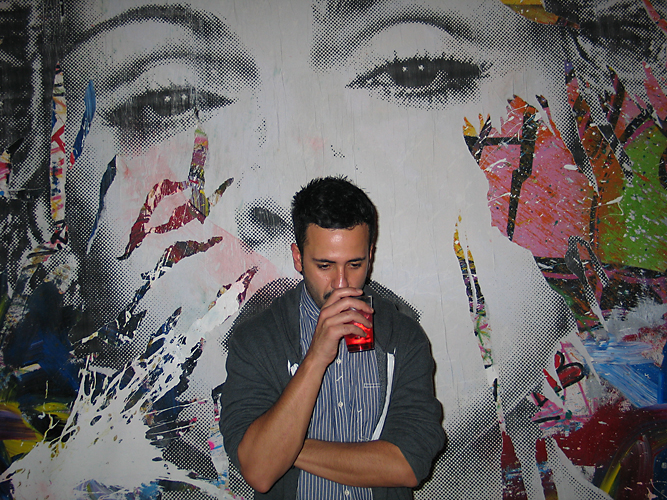 The Mr. Brainwash exhibit “Under Construction” was conveniently located in the same building as the XXXX Magazine, “The Untitled Magazine” Voyeur exhibit, so after our opening on the 3rd closed we wandered over there to get a glimpse of the excitement.  The opening was originally scheduled for the night before, but obviously they weren’t ready as despite the email blast about the opening on the 2nd, the doors were chained shut with a sign saying come back tomorrow. Never one to disappoint, Mr. Brainwash once again presented a spectacular installation of his iconic graffiti and street art mostly inspired by the rich and famous, or other artists most notably Warhol and Banksy.  He took over a 25,000 sq ft raw retail space at the Boulan building on 21st street, which was filled with massive spray cans and wall size paintings of celebs like Madonna.  In many respects it was a re-hash of his New York “Icons” exhibit, so I kind of felt like been there – done that. Yet to be fair, it was by far the most interesting and impressive independent  solo show at Art Basel this year. 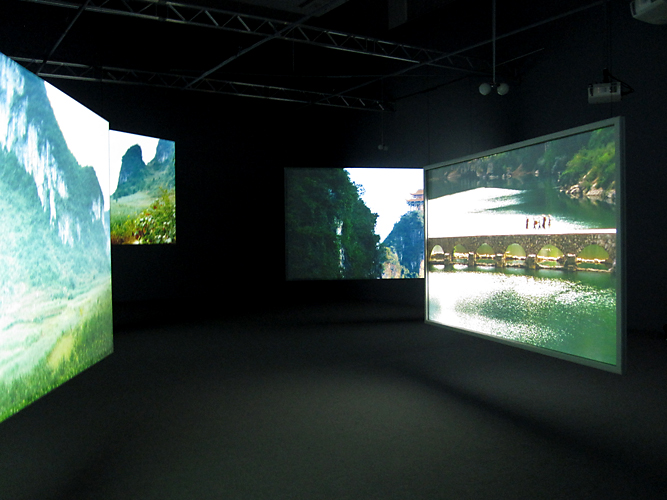 At the Bass Museum, I checked out Isaac Julien’s brilliant video art installation, with a series of projectors and panels juxtaposing the videos at various moments in time, creating a dynamic and illusory effect. While watching the work, you became completely absorbed by the experience. The timing of the different videos playing on the various panels created a magical effect. Truly an inspirational installation. 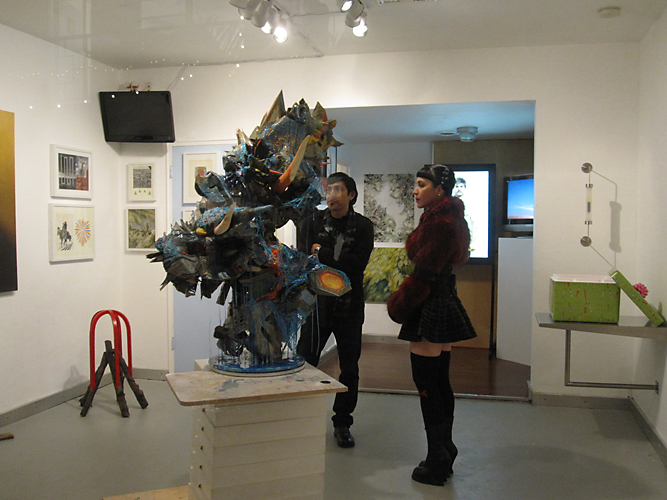 On a completely different note, we checked out the cute and almost camp Aqua Art Fair. Based in Seattle, Aqua’s organizers make it their mission to promote programming primarily from the West Coast, focusing on progressive galleries and emerging artists.  Featuring over 40 galleries, including exhibits from for example the School of Visual Arts and the Art Slant Gallery from Los Angeles, the mood was young and upbeat.  Located at the Aqua Hotel on 15th and Collins, we were greeted by a drag queen when we walked in, and the fair entertained visitors with a live band in the courtyard as well as local Miami ladies dressed up like mermaids by the fountain.

Sante D’Orazio at the Delano Hotel

A few other interesting events we checked out included Sante D’Orazio’s intimate party at the Delano Hotel, The Vogue Art Basel Kick-off party at the Raleigh Hotel (more of a shopping event than an art one), and the Interview magazine party. The new Soho House on 41st and Collins was one of the better venues this year, and as it was conveniently located next to my hotel, I ended up there most evenings.  We checked out the W magazine event there, and later danced at the 2nd floor restaurant lounge to the live samba band.  I managed to also check out the Soho House beach, which is definitely a winner with the coolers full of complimentary water and soda, as well as old-school tin watering cans for a bit of relief from the heat. 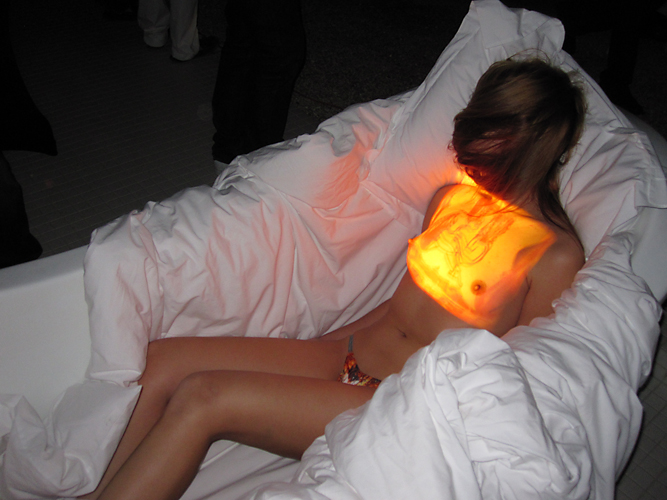 The Playboy Dinner / Party at the Standard Hotel was also a fun diversion, despite the rather unusually cold weather. They spiced things up Playboy style with nude performance artists, body painting and the requisite group of partiers frolicking naked in the jacuzzi. After hours at Art Basel is always fun, with so many parties going on it is hard to choose where to go to next.  I kept it pretty low-key this year, but still managed to check out Le Baron at the Delano, The Wall at the W hotel and of course Mokai for our Voyeur Exhibit after-party hosted by Unik.

Article and Photography by Indira Cesarine