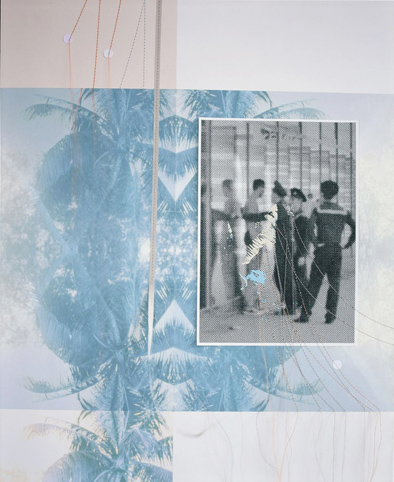 Tanya Bonakdar Gallery is very pleased to present Carpets and Couplets, an exhibition of new work by Dirk Stewen. For his third solo show with the gallery, Stewen focuses on mirroring and doubling, using kaleidoscopic ornamental patterns in combination with antique paper, thread, confetti, found text, sculptural elements, and his own black and white photographic images. The exquisite compositions that result, at once precise and delicate, explore the relationships between repetition and transfiguration, aesthetics and experience, image and emotion.

In the entryway, Stewen presents three assemblages of photography, thread, and streamers, interspersed with sheets of blank paper. The repeated pattern that anchors these compositions is from a photo of a palm tree, taken by Stewen in South East Asia, double exposed and manipulated into an abstracted sequence. Like a memory revisited over and over, changing slightly each time until it is fuzzy at the edges, Stewen flips and layers the image of the palm tree until it becomes an ornamental pattern. Punctuating this pattern with black and white photos – of a fight between Russian sailors, and a man’s dress shoe – Stewen then adds colored thread and confetti. The thread provides subtle streaks of color that run throughout the composition, uniting the different segments, literally stitching together the patterned areas and the blank ones. As in poetry and music, where each word or note is dependent on the rest for meaning, each visual component in Stewen’s work relates to the next, transforming and heightening significance to create a whole that is more than the sum of its parts.

A sculptural installation titled The road occupies the main gallery. Composed of a found text, a photograph, two delicate black rods, and a roll of paper unfurling into the space, this work examines the relationship of parts to a whole in three dimensions. The text, also titled “The Road,” describes a work by Camille Pissarro but the accompanying illustration has been removed and “The Road” appears to refer to the paper path laid out on the floor. The photograph, framed with the text, is of a man with his arms raised in a gesture much like a photographer with a camera would make. Here themes of mirroring and doubling recur – the subject of the photograph mimics the photographer, and the road proceeds both forward and backward. Repetition is also crucial to Untitled (what I believe), two four-part works that share a title and are also installed in the main gallery. Made from a double exposure of a photograph of rose twigs, these works are kaleidoscopic positive and negative versions of one another.

The photos incorporated in each work serve as a catalogue of Stewen’s experiences and are consequently autobiographical and full of emotion, though many have the elegant and impersonal look of a studio shot. The photos in the compositions in the side gallery, titled Soft Corps, XXVI-XXVIII, were taken in Tokyo, New York, Amsterdam, and Botswana and all describe and celebrate psychological resilience. Combined with antique paper, painted confetti and colored thread, the photography balances out these lyrical elements to create compositions that are both moving and whimsical.

Living and working in Hamburg, Germany, Stewen (b. 1972) is presently the artist-in-resident at the Chianti Foundation, Marfa, TX, through January 2013. The artist’s upcoming exhibitions include ONLY HERE: The Federal Republic of Germany’s Contemporary Art Collection Acquisitions from 2007 to 2011, Art and Exhibition Hall of the Federal Republic of Germany, Bonn, January 18 – April 14, 2013 (group) and Love is Colder than Capital. An Exhibition about the value of feelings, Kunsthaus Bregenz, Austria, February 2 – April 14, 2013 (group).