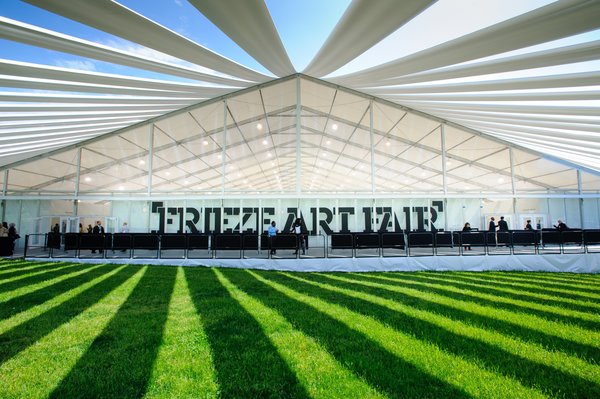 Frieze New York, located in the unique setting of Randall’s Island Park in New York City, have just announced the Frieze Projects program of specially commissioned artworks to be released this year. The program is curated by Cecilia Alemani and includes seven newly commissioned projects.

For the 2014 edition of the fair, Frieze Projects will celebrate Al’s Grand Hotel, a legendary project realized by Allen Ruppersberg in 1971 in Los Angeles, and restaged for 2014 by Ruppersberg in collaboration with Public Fiction. Frieze New York will take place beginning May 9th until May 12, 2014 and will present over 190 of the world’s leading contemporary galleries.

Update:
It was announced this week that clothing retailer Gap will be collaborating with the Frieze Art Fair. “Gap White Space” will be a pop-up shop situated on Randall’s Island Park. The space will feature a lounge and café alongside selections of merchandise.  Among the wares hanging on the racks, there will be 11 limited-edition T-shirts, a result of a long-standing collab with Visionaire, that feature UV-sensitive fabric. T-shirts were designed by artists Yoko Ono, Peter Lindbergh, Richard Phillips, and Alex Katz.

“I’m excited for Gap to be partnering with Frieze, to bring the Gap White Space experience to one of the most renowned and respected contemporary art fairs in the world,” said Rebekka Bay, Gap’s creative director and EVP of global design. “With this being the first time Frieze has partnered with a fashion brand to create an experience, Gap is moving collaborations forward and allowing people to access contemporary art in a different way.”