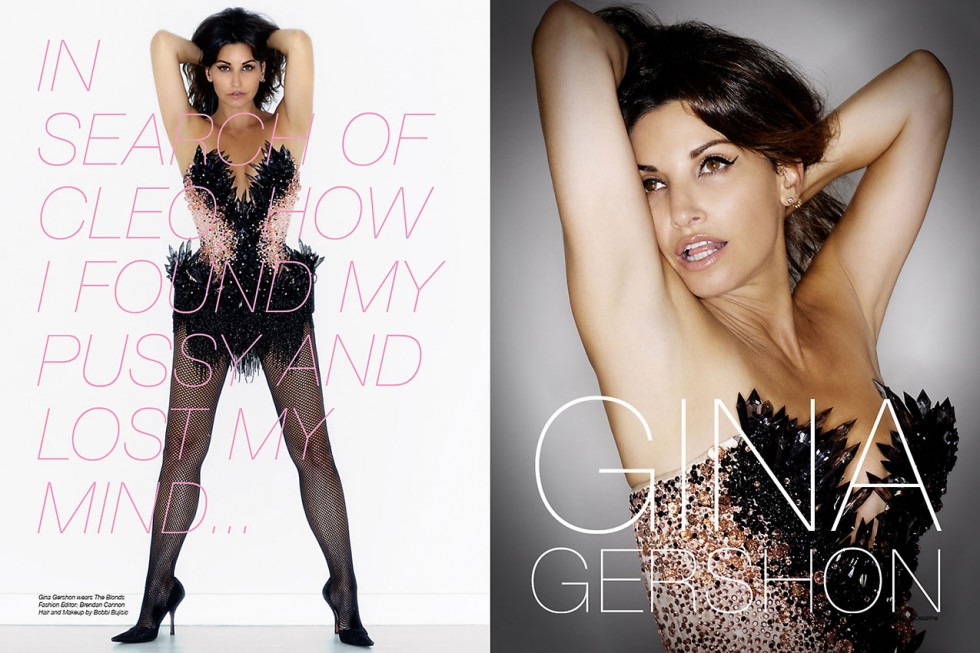 MADE IMMORTAL BY HER AUDACIOUS FILM ROLES in cult favorites including Showgirls and Bound, Gina Gershon, still stunning at 50, is a true renaissance woman. Her accomplishments include Broadway, film, television, music albums, audio books and novels. After moving to New York City to study at NYU, she founded the theater group Naked Angels (which is still going strong after 25 years) and developed an addiction to performing. After a small role in Pretty in Pink starring Molly Ringwald, in 1988 she landed a role in the film Cocktail alongside Tom Cruise. She was critically acclaimed for her role as Nancy Sinatra in the 1992 biopic Sinatra and appeared in several episodes of Melrose Place before she stole the show as the sultry “Cristal Connors” in Showgirls. In 1996 she took on the controversial role of Corky in Bound, which helped pave her way in Hollywood. The following year she landed a role opposite John Travolta and Nicolas Cage in Face/Off. “I was fortunate enough to play many diversified roles in film, television, and stage… not always to the liking of my managers and agents, but I always did what I wanted.”

The Untitled Magazine caught up with Gina in New York to talk about her latest projects. She has several new films being released this year, including William Friedkin’s Killer Joe, also featuring Matthew McConaughey, Emile Hirsch and Juno Temple, The Scribbler, Mall, LOL, The Unknown Son, Breathless, and she just wrapped the comedy Dealing With Idiots with Jeff Garlin, “an improv funny movie which should be a lot of fun…”. On top of everything else, she is celebrating the release of her second novel, In Search of Cleo, How I Found my Pussy and Lost my Mind. The book, a hilarious tale of her trials and tribulations searching for her lost cat, has her now coined as a “cat lady” despite her insistence otherwise. Gina’s story is nothing if not unique, “In my life, truth is definitely stranger than fiction.”

The novel, which she wrote in less than seven months, retells her lost cat melodrama. “In Search of Cleo, How I Found My Pussy and Lost My Mind was inspired by true events when my cat was taken from my home while I was away. I had to search for two and a half months to find him on the streets of LA. I ended up making an album a couple of years ago called “In Search of Cleo”, not that they were songs about my cat, but it was thematically the same thing–about what people do to in order find true love, to find relationships… It’s when I was going to perform my album that I decided to tell the story of Cleo in between, to kind of marry the two to make it more of a performance. I would play the music and I would tell the story of Cleo, and I always said, ‘This is a true story, I’m not making this up,’ and no one ever believed it was a true story! People would be like ‘no way,’ and ‘it’s such a crazy story!’”

When she lost Cleo, “Different friends of mine would help me search for the cat, sending me to different cat psychics, or Santeria priests or some crystal man. Everyone was trying to help send me in the right direction. I found myself in some of these strange subcultures, you know, also in like cult meetings, you know, anything! I was desperate. Desperate times call for desperate measures. I was doing everything and anything I could to get my cat back!”

Fortunately for the lady whom, “cats kind of recognize as one of their own” she found her Cleo. We can read her hilarious “Kitty Memoir” in between checking out her numerous new film performances. When asked how she manages to produce so many different projects simultaneously, she laughed, “I don’t know how I do it—I need a vacation!”

Interview and photography by Indira Cesarine for The Untitled Magazine