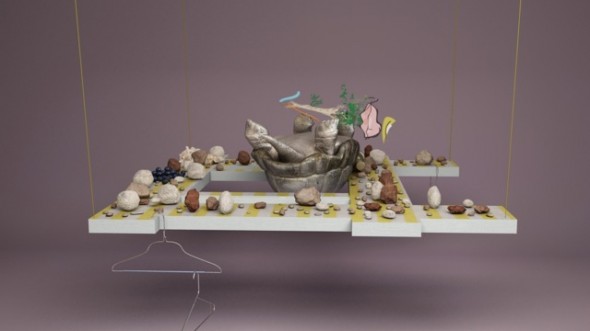 In Summer 2013, CCS Bard presents the first U.S. museum exhibition of British artist, Helen Marten.  Titled no borders in a wok that can’t be crossed, Marten’s exhibition is curated by Beatrix Ruf and is the first major collaboration between CCS Bard and the Kunsthalle Zürich and was presented as part of the inaugural program of the Kunsthalle’s newly expanded Löwenbräukunst complex in 2012.

For no borders in a wok that can’t be crossed, Marten has created a group of works which interweave the diversity of her work in terms of media – from sculptures to wall pieces and floor works – in a comprehensive installation including many new works created specifically for the CCS Bard exhibition.

This exhibition is the third and final iteration of a joint project with the Kunsthalle Zürich (September-November 2012), the Chisenhale Gallery, London and CCS Bard.  In Zürich the exhibition was titled Almost the exact shape of Florida and at the Chisenhale, Plank Salad (November 2012-January 2013).